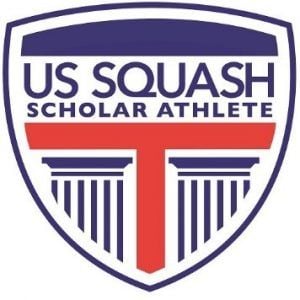 Teddy and Harbour are both members of their varsity squash teams and will both serve as captains this year.

Teddy began his squash career at the age of nine. He was introduced to the game by his mother, who played squash at Choate. Immediately after learning squash, Teddy fell in love with the game. At the age of ten, Teddy began entering squash tournaments and has been playing competitively ever since.

His favorite Deerfield squash memory was during his 9th grade year, when he defeated his opponent in the deciding match to beat Episcopal Academy (PA) 4-3 at Nationals. The victory allowed Deerfield to finish the season ranked 6th in the country. This was a particularly great experience for Teddy since he was the only 9th grader on a team made of mostly juniors and seniors.

Teddy will serve as captain for upcoming boys varsity squash season. He is most looking forward to working with a young, but talented, team this winter. The team has promise and he hopes they can find success this season. Teddy is also very excited to work alongside Coach Silipo, as he has been someone Teddy’s looked up to since his first year at Deerfield.

Like Teddy, Harbour started playing squash at a young age. She originally started as a tennis player but switched to focus on squash after being introduced to the game at the age of nine.

Since coming to Deerfield, Harbour has loved her experience with the girls varsity squash team. The close-knit team environment has been the biggest factor in her positive experience. Aside from traveling and spending time with her teammates, Harbour’s favorite memory from last year’s squash season was tying Greenwich Academy in the New England Championships.

For the upcoming winter squash season, Harbour will serve as a co-captain of the girls varsity squash team along with fellow classmate, Ashley Manning ‘19. Woodward hopes to emulate past Deerfield squash captains by continuing to foster an inclusive team atmosphere.

Next weekend, Harbour will visit San Francisco, California, to compete in a tournament.

Durfee and Woodward will both be honored with the other 2016-2017 U.S. Squash Scholar Athlete Award recipients at the 2017 U.S Open Squash Championships on Sunday, October 8th, in Philadelphia, PA.