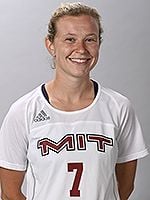 After graduating from Deerfield in 2015, Allie Hrabchak ’15 continued her soccer career at Massachusetts Institute of Technology. Coming off a historic 2016 season where the team registered the most wins ever with an overall record of 17-6-1 (8-1-1 NEWMAC), Allie and her MIT teammates have continued to enjoy success during the start of their 2017 season. Through the first ten games, the team remains a perfect 10-0.

Building on her successful freshmen and sophomore campaigns, Allie has been one of the top midfielders for the Engineers this season as a junior. She has played in nine of the ten matches, making starts in eight contests. Currently, Hrabchak is 2nd on the team for goals (6) and tied for 3rd most points (12). She has also recorded 2 game-winning goals this season.

At Deerfield, Hrabchak was a five-time varsity letterwinner in soccer, track & field and lacrosse. During her senior year, she served as a co-captain of the girls varsity soccer team. She was also awarded the Marjorie Ellis Cup (formerly “The 1989 Award”), which recognizes an individual who has shown exemplary skill, sportsmanship, and devotion to her teammates, and who has made a significant contribution to the girls varsity soccer team. During her time at Deerfield, Hrabchak was also a member of the swim team, Math Club and Robotics team.

At MIT, Hrabchak is majoring in aerospace engineering. She has also completed research in the MIT Space Systems Lab as well as Bucknell University’s Gateway to Advanced Manufacturing Enterprise.

This weekend, MIT will travel to Clark University in a challenging New England Women’s and Men’s Athletic Conference (NEWMAC) road match. The game is scheduled for Friday, September 29 at 7:00 p.m.

Keep up the great work, Allie!