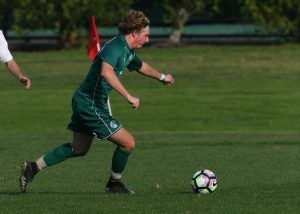 On a beautiful Saturday afternoon in the Pioneer Valley where temperatures almost reached into the 90s, the Deerfield boys varsity soccer team fought until the very last minute to earn a come from behind win over visiting Brunswick Academy.

The Big Green started strong, creating a number of early scoring opportunities and keeping the visitors on their heels for the majority of the first half. This pressure ultimately led to a break away for Young Gun Lee ’19 who was brought down in the box by the Brunswick keeper, earning a penalty kick for the Big Green. Unfortunately, the ensuing penalty kick attempt was not converted as the Brunswick keeper saved the shot and covered up the rebound. Heading into halftime, the score remained tied at zero.

When the second half resumed, Brunswick came out a different team, and managed to find the opening marker under a minute into the half. A Brunswick cross from their left midfielder found the foot of a striker on the right side of the goal who made no mistake knocking the ball into the back of the net. Despite being down a goal and with time running out, Deerfield continued to press forward, looking for the equalizer.

Shortly after moving to only three defenders in the back, a cross from Senior Kevin Hendrick ’18 was knocked back into six yard-box and found the foot of Sophomore Skye Bacon ’20, who tied the game at one with only eight minutes to go. The goal gave the hosts new life and the team continued to play direct, earning a free kick from just over forty-yards out with two minutes to go. Hendrick ’18 stepped up and hit the ball towards the near post, catching the keeper off guard with the long distance shot. The shot found its way into the upper left hand corner of the net, giving the Big Green a 2-1 lead with little time to respond.

As time expired, the boys varsity soccer team earned an exciting 2-1, come from behind win against a very athletic Brunswick squad. The Big Green will look to carry their momentum into their next contest when they host Taft on Wednesday September 27th at 3:30 PM. The game will wrap up Deerfield’s four game home stand.