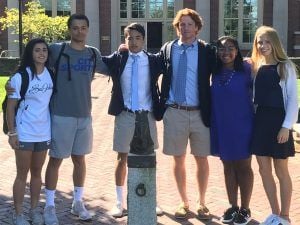 This week’s player of the week for varsity field hockey is Mimi Pastor ’19. Mimi set the tone at practice all week, playing with high energy and enthusiasm and pushing herself to improve in every single drill. She earned herself a starting spot for the Hotchkiss game on Saturday, and her leadership and tenacity were invaluable during the match. With thirteen minutes remaining in the game, Mimi was able to fire up her teammates during a time out and it created just the momentum shift that the Big Green needed at that time. We look forward to Mimi’s continued leadership and grit, both on and off the field, for the remainder of the season!

Boys’ XC’s athlete of the week this week is JJ Siritantikorn. JJ took the line at the Canterbury Invitational with a determined set to his gaze, and he came through in a big way for our team by running his best lifetime race. After a smart, disciplined first mile, JJ attacked the hilly second mile and burst back onto the finishing field with a little less than a mile to go and a fierce kick left in his legs. Passing competitors throughout the final half mile, JJ ultimately finished 15th overall and 3rd on our team – a great effort from Jota-Jota!

The girls JV soccer athlete of the week is Hanna Deringer ‘20. In her first game playing goalie, Hanna faced a tough Exeter team but came up with some exceptional saves. Looking like a veteran keeper, Hanna stopped numerous one vs. one break aways to keep the game close. Congrats, Hanna!

The boys varsity water polo athlete of the week is Graham O’Brien ’19. In a thrilling overtime match against Andover, one that was exhilarating and exhausting at the same time, goalie Graham O’Brien ‘19 kept his team in the game with blocks at key moments. Overall, he made 17 saves in the contest. He also assisted on a goal with a pool-length pass that skipped off a teammate’s hand and into the net. Congrats, Graham!

Sam Dwinell ’18 is the varsity football athlete of the week. A post graduate wide receiver, Sam put forth a gritty performance for the Big Green in their hard fought loss against Suffield on Saturday. Sam’s efforts on offense, defense and special teams were remarkable as he made big plays throughout the game. On the day, Dwinell had 4 receptions for 84 yards, 3 rushes for 56 yards and a broken up a pass that led to a DA interception. Sam plays the game with phenomenal effort and tenacity, and will be a player to watch in the weeks ahead. Congrats, Sam!

Victoria Patterson, passing through two miles on the hilly and steamy Canterbury course on Saturday, was pushing herself to the maximum as she led the entire field by over 30 seconds. Suddenly, emerging from the last giant hill with the sun beating down mercilessly on her, she succumbed to the heat and collapsed on the course. Unable to raise herself, she entered into an existential crossroads; should she give in, and for the first time in her career drop out of a race, or like in the movie Chariots of Fire, get back up and launch herself back into in the race. Her coach, witnessing the entire event, suggested that stopping was certainly an option, but those words seem to stir something deep inside the runner. The decision was made- Chariots of Fire it was, as Victoria lurched upward onto her legs and drove herself forward. After some faltered steps, she regained her earlier momentum and managed to win the race, collapsing once again at the finish. In retrospect, she realized she was suffering from a perfect storm of a cold virus combined with lack of sleep from the recent heat. For her efforts, Victoria Patterson is the Girls’ Cross Country Athlete of the Week!

The girls reserve field hockey athlete of the week is Saadhya Bahudodda. Saadhya is our most seasoned defender. She played steady defense these last two games. Time and time again, Saadhya came up with the steady stick or the solid play to stop the other team. She also was an excellent role model who encouraged and guided our new players. She’s always upbeat and supportive. Congrats, Saadhya!

The boys varsity soccer athlete of the week goes to Kevin Hendrick ’18. Since the beginning of the season, Kevin has brought energy to the team’s backline and along with captain Jackson Pitcher ’19, he has made it difficult for opposing teams in our defensive third. This past week however, it wasn’t only Kevin’s defensive responsibilities that helped the team earn a much-needed win against Brunswick. After setting up the tying marker with under ten minutes to go, Kevin completed the comeback with a goal of his own off a free kick from about forty yards out. Congrats, Kevin!

Niyafa Boucher is the JV Field Hockey athlete of the week. Under brutally hot conditions, in full goalie gear, Niyafa played her heart out at our game against Hotchkiss on Saturday. Throughout the game she worked in sync with her defense, directing them to mark Hotchkiss players and pressure the ball while also supporting her in watching the ‘weak side’ of the cage. She claimed her space, letting the Hotchkiss players feel her presence as she moved with agility and determination. She saved countless shots on goal and held the opponents to a scoreless first half with the help of her defenders. The first goal came at the beginning of the second half which coincided with a moment when we were playing with only 10 on the field due to a penalty card. The next two followed quickly as she and the defense scrambled a bit to find their rhythm again. We could hear and see Niyafa and her fellow defenders encouraging each other to stay positive and focused, and to not let down. They held Hotchkiss to only one more goal in the second half. Niyafa was a solid leader on the field, as a fierce competitor and as a supportive teammate. We collectively could not have been prouder of her performance and of her perseverance in the midst of the adversity of the day.

Netanya Jimenez is varsity volleyball’s athlete of the week. Though a knee injury prevents her from seeing the court, it has not stopped her from being a great teammate! Netanya travelled with us to Choate for a very long day of volleyball last weekend, and she was the loudest person in our cheering section. Her energy and encouragement definitely helped us get the win in our third match of the day. Thank you for being such a supportive teammate Nat! We hope to see her back on the court soon.

The boys Jr. B soccer athlete of the week is senior co-captain Nic Labadan. Nic had a solid performance in our season opener against Eaglebrook scoring two goals. Nic has also provided the team with solid leadership in our opening few weeks.