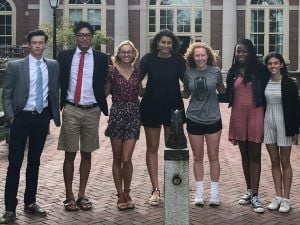 Congratulations to the first Athlete of the Week award recipients for the 2017-2018 academic year!

With Choate prepared to defend our two returning field players, senior co-captain Nolen Rockefeller dominated his defenders and unleashed a volley of quick shots the opposing goalie had no chance to block. More important, he played at both ends of the pool with poise and purpose.

Helen ran to a decisive victory in the junior-senior race at the Brush Invitational, winning by 15 seconds and placing herself firmly among the top runners on a solid Deerfield squad. Running through two miles with a lead pack of five Deerfield girls, Helen made a move in the last loop that strung out the pack and proved unmatchable on the day. Helen trained hard over the summer, dedicating herself to making the team, but also to making the team that much better. The consummate team-runner with an exemplary work ethic, Helen is this week’s girls’ cross country Athlete of the Week!

The football team’s athlete of the week for his efforts in our 23-6 victory at Lawrenceville was Inho Choi ’18. Inho was all over the field on the defensive side of the ball where he blanketed Lawrenceville’s top receivers throughout the game. He led the team in pass breakups, solo tackles and also scored the Big Green’s first touchdown of the season on a 58 yard reception from Jack Bill ’19. Inho impacted the game from start to finish and we are excited to see him continue to excel as the season continues.

Brenna is the girls varsity soccer Athlete of the Week for her effort and contributions to the team during the week leading up to and including our first game of the season vs. Milton. Brenna provided a huge offensive spark for the team by contributing to all of the Big Green’s 3 goals vs. Milton to help the team earn a come from behind 3-3 tie. On the day, she tallied 1 assist and 2 goals. We look forward to Brenna’s continued offensive energy! Great job Brenna!

The boys varsity soccer athlete of the week goes to Nolan Zusi ’19 for his high work rate at practice and his attention to detail. In our first game of the season, Nolan came off the bench and played a big role in slowing down the Avon midfield. His strong performance against Avon earned him a starting spot in the midfield on Saturday against Salisbury, a game in which the junior would score two goals to help the big green earn their first win of the season.

The boys’ XC athlete of the week is Vanja Obradovic. Vanja is new to cross country but worked hard throughout the first two weeks of practice, culminating in his first ever 5K race on Saturday at the Brush Invitational. Vanja executed exactly the race plan we asked him to and ultimately outkicked a Northfield Mount Hermon athlete in the final meters of his race. Most importantly, the moment he and his opponent crossed the finish line, Vanja turned and extended his hand in congratulations. It was a great moment of sportsmanship and athleticism from a new member of our team.

Freshman Hannah Roche is the varsity field hockey team’s athlete of the week. Since the day Hannah joined us at preseason, she has demonstrated an admirable work ethic and has improved every time she steps on the field. Hannah had an exceptional game against Berkshire last Saturday, where she created offensive opportunities and was relentless in her efforts to get the ball back if there was a turnover. She has quickly earned the respect and admiration of her teammates and coaches, and we look forward to more stellar play from Hannah throughout the season!

Melissa Mitrovic may be new to Deerfield, but it is apparent that she feels right at home on the volleyball court! Her passion for the game is undeniable. She arrives early for practice each day, enthusiastic about the day and eager to improve as a player. It doesn’t matter if we are playing a fun drill in practice or running stairs for conditioning, Melissa gives her all and pushes her teammates to do the same. She tries to make a play on every ball and is a smart, aggressive player at the net. We look forward to her being a force to be reckoned with on the court this season! Keep up the hard work Melissa!

Even though she wasn’t able to make it on the roster, Ashley still wanted to assist the team in some way. So she took the initiative to become a manager. Not only will she take on some of the duties of being a manager, she will get to participate in team drills as well. Her determination to be a better player for next season shows commitment and drive to better herself. Thank you, Ashley!