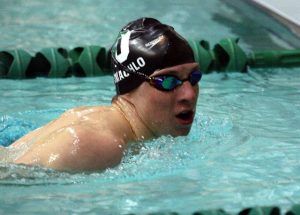 Most recently, Smachlo and 10 fellow University of Michigan teammates were in action at the 2017 Phillips 66 National Championships, held June 27-July 1 at the IUPUI Natatorium. The event allows swimmers to put themselves in contention for spots on the 2017-18 U.S. National team and for the World University Games. At the event, Smachlo had one of the best performances of the week, where he shaved nearly four seconds off his seedtime to make the final in the 200-meter butterfly, in which he finished 8th overall (2:00.46). In other events, he took 16th in both the 50-meter (24.54) and 100-meter butterfly (53.39), and 44th in the 200-meter IM (2:06.08).

Following the conclusion of his freshman year, Smachlo earned Scholar All-America recognition from the College Swimming Coaches Association of America (CSCAA) for his achievements in the classroom. The individual selection recognizes students who have achieved a grade point average of 3.50 or higher and have participated in their respective NCAA Championships. Additionally, the University of Michigan men’s swimming and diving team received the team CSCAA Scholar All-America honor for posting a team GPA of 3.0 or higher for the spring semester.

In his rookie collegiate campaign Miles has achieved student-athlete success both in the classroom and in the pool. During his days at Deerfield, Miles set school records, won meets and won individual championships. It is clear from all that he has accomplished so far in his academic and swimming career that the possibilities are endless. Congratulations Miles on your success as a student-athlete thus far!