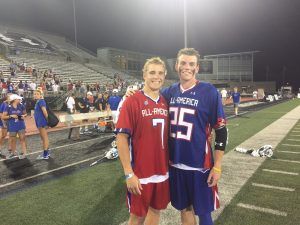 The 2017 Under Armour All-America Boys’ Senior Lacrosse game was played on July 1st at Towson University’s Johny Unitas Stadium in front of 4,511 fans. Two Deerfield teammates were selected to play in the game – Jackson Caputo ‘17 was a defensemen for the North squad while Bubba Fairman ’17 was an attackman for the South.

The North team was victorious over the South by a score of 18-16. Finally, snapping a 6 consecutive year losing streak.

Click here to visit Inside Lacrosse for highlights and video from the game.