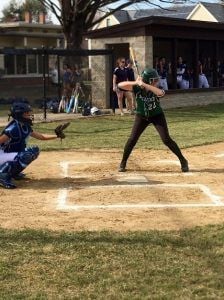 Although the game was cancelled due to rain, Ireland Miessau was Deerfield’s WNEPSGSBA All-Star player this season. Ireland earned this selection because of her amazing play both in the field and at the plate. She pitched 77 innings with 117 strikeouts and only 7 walks. Ireland’s .592 batting average was the second highest on the team and she led the team with 4 triples and 3 home runs. Not only is she incredibly talented, but she always put the team first. During practices, she was happy to work with a new player offering batting tips or other small suggestions for how to improve. Ireland is a gamer who will be sorely missed next year!

The 2017 season was a historic campaign for the Big Green. At the conclusion of the regular season, the softball team finished 10-4-0, which clinched them the #5 spot in the Class A WNEPSGSBA Tournament. The last time the Big Green appeared in post-season softball action was 2006.