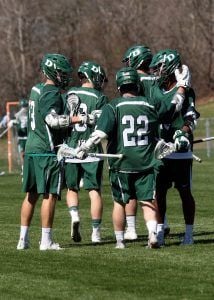 Jackson Caputo and Bubba Fairman were selected by Inside Lacrosse along with members of the selection committee to the 12th annual Under Armour All-American Lacrosse game. The All-America game is scheduled for July 1st at 8pm at Towson University Maryland. For the contest, players will be divided into North and South teams and those rosters will be announced closer to the event. Additionally, both Caputo and Fairman were named to the All-USA Preseason team as they prepare for their collegiate debut next season.

Next year, four out of five of this year’s award winners will be competing at the collegiate level. Bubba will be competing for the 2017 National Champion Maryland Terrapins and Ted will join the 2017 NCAA Division I Semifinalist Denver Pioneers. Griffin will help the Yale Bulldogs defend their 2017 Ivy League Tournament Championship title and Caputo is headed to Brown to join the 2017 Ivy League Tournament Finalists.

Congrats and best of luck!