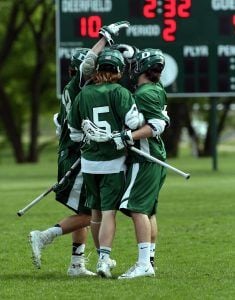 With the conclusion of all conference tournaments last Sunday, the NCAA college lacrosse national championship brackets have been set. The Division III bracket got underway earlier this week while the Division I tournament will kick off Saturday.

In the Division I bracket, Deerfield will have seven former players take the field for their respective teams. Graduate student Bobby Gray ‘12 and junior Patrick Hadley ’14 enter the tournament as the highest seeded DA alums as they hold the #4 spot with the University of Notre Dame. The Fighting Irish will take on Marquette this Sunday at noon in South Bend, IN. The winner of that contest will meet the winner of Saturday’s game between the University of Denver and Air Force, which will see two Deerfield alums go head-to-head. Freshman Chris Sullivan ‘16 and the #5 Pioneers host Air Force and former Big Green D man Joseph Redfearn ’15. The Falcons will look to avenge an early season 14-6 loss at the hands of the Pioneers. As you move further down the bracket, two more Deerfield Alums will team up at Duke and travel to Johns Hopkins in an attempt to upset the hosts. Blue Devil senior Teddy Henderson ’13 and freshman Joey Manown ’16, who has enjoyed a stellar rookie campaign, posting 31 points in 16 games will look to guide their squad to an opening round win on the road. The final alum to compete for the Division I title is Matt Cunningham ’14 who will don Tar Heel blue as a member of the defending National Champions, the University of North Carolina at Chapel Hill travel to upstate New York looking to hand Albany their third loss of the season.

With the Division III bracket already underway, two Deerfield alums have booked a spot in the second round, while Chris Roussos ’15 and Colorado College lost in the first round to a very talented Cabrini team. Henry Decamp ’15 and the Denison men’s lacrosse team are currently riding a 16 game win streak, their lone loss came in the first game of the season when the fell at home to Washington and Lee. Denison knocked off Carthage in the first round and will host Wesleyan (Ill.) this Saturday. After losing in the NESCAC quarterfinals to Middlebury, Benjamin Garfinkel ’15 and Amherst College earned an at-large bid and took care of business in round one by beating Springfield College. As a result, Amherst will see a familiar foe in round two when they travel to Bates for a NESCAC showdown.

Good luck to all alums!