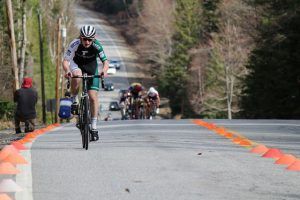 The Deerfield Academy Cycling Team traveled far north to Bethel Maine this weekend to take part in the Gould Academy Road Race, a 20 mile contest on a very hilly course. Deerfield was without captain Liam Holowesko ‘18 and Max Geraci ‘19 who were both sidelined with injury, and for Alex Weinman ‘19, Julian O’Donnell ‘18 and Teddy McCarthy ‘20 this was the first road race of the season after a couple of rainouts.

The race got off to a solemn start as a moment of silence was taken for Chad Young, a 21-year-old former prep school cyclist and teammate of Holowesko who tragically died of injuries sustained in a bike crash last week. The race began after a short, tear-filled speech from coach Eric Calhoun in Chad’s memory.

For the first few miles of the race it seemed as if the 18 racers were out for a leisurely Sunday ride. The Boy’s A field sped up and slowed down as the race strategy of each rider played out, and all three Deerfield riders held good position in the field. The race pace then slowed way down, that at one point the A field was caught by the Boy’s B field that started five minutes behind them. After miles of flat riding, the field hit the hills and the action started to heat up. After passing the B field, an attack by a Proctor racer was followed by 10th grader Weinman, but the field soon caught up to the pair after dropping a few riders off the back. The rest of the field stayed together until the last few miles where the climbing really picked up.

McCarthy and O’Donnell were both caught in a crash and were unfortunately unable to reconnect with the field on the climb, taking away the chance of a high finish for them. The field shrank to about ten riders after the crash, and with about two miles to go Weinman attacked by himself and opened up a 20 second lead on the other riders. He made it to the final hill with this same gap, and though the field was able to shrink his lead to nine seconds, Weinman rolled over the line as the winner of the day. It was Weinman’s first individual race win after finishing 4th in the league last year, and with this result and a strong team time trial by the entire Deerfield team, he now sits in first place in the Prep School League.

O’Donnell and McCarthy finished 17th and 18th, respectively. Despite their bad luck there were positives on the day, as they both stuck to race strategy perfectly and O’Donnell said he felt very strong before the crash, boding well for future races. The Deerfield Boys will race again this Wednesday at the Killington Mountain School Time Trial, and hopefully Geraci will be able to rejoin the team for the contest.