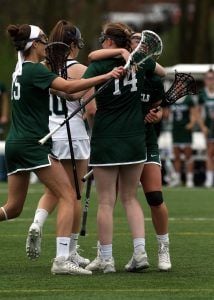 Girls varsity lacrosse earns back-to-back wins over Loomis and Westminster to improve their season record to 5-4-0 as they approach the final third of their 2017 regular season schedule.  At home yesterday, the team battled for 50 minutes with Loomis in a closely contested game. In the end the Big Green prevailed over the Pelicans to earn an 11-9 victory on their home turf.  Last Saturday, the team battled back from a 6-goal deficit on the road at Westminster to capture a thrilling OT victory.

Deerfield played fifty minutes of great lacrosse in yesterday’s battle against Loomis.  Though execution was at a high level all over the field, the greatest strength of the day was the extent to which the Big Green played as a TEAM.  Seventy percent of our goals were assisted, and our defensive unit came up big continuously throughout the contest.  Critical goalie saves also served as an acute strength of the day’s contest as well.   Several of our younger players can be credited for stepping up in a big way on the field, and player leadership was palpable both from the sidelines and the field’s interior.  It was a great full-team victory involving all 21 players, and our managers are deserving of a shout out as well for the helpful stats delivered at halftime.  The Captains named Christina Halloran as the day’s Team Player of the Game for her hustle and impact in the midfield as well as for her two goals on the day’s contest.

Westminster came out with 6-0 lead in the first 23 minutes, and though the rest of the field felt balanced, the Black and Gold were able to find the back of the net while our Deerfield shooters struggled.  We weren’t able to claim space on the scoreboard until the last minute of the half. With a ‘one at a time’ confidence, however, DA entered the second half with a clearly defined shooting agenda and belief in themselves and their teammates.    During the 2nd half, Westy scored three goals in the first ten minutes to bring their tally to 10.  At that moment, however, the Big Green unleashed a comeback and scored approximately every three minutes to bring the game to OT.   2 minutes into overtime, Kathryn Grennon was awarded a free position shot and sent a riser to the upper left corner.  In our post-game chat, the captains felt as though the entire team was deserving of the Player of the Game award.

The team will hit the road again this weekend and look to continue their winning ways at Hotchkiss this Saturday at 4:30pm.