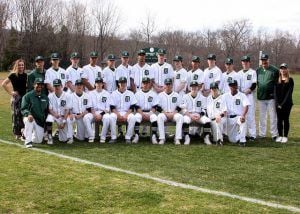 Yesterday the boys varsity baseball team traveled to Cushing for their 2nd conference meeting of the season. In their first meeting on April 8th, the Big Green earned their first conference win by defeating the Penguins 5-2 at Headmaster’s Field.  Yesterday, the Doors fell behind early at Cushing, but rallied back in the 5th inning to eventually regain the lead and seal their 2nd victory of the season versus the Penguins. Coach August described yesterday’s team effort as, “its finest performance of the season.”

With four 9th graders in the starting lineup, including 9th grade pitcher Henry Gustavson, the Deerfield baseball team traveled to Cushing Academy on Wednesday, May 3.  The squad came away with its finest performance of the season, a stirring 6-4 victory that demonstrated all that these young men are capable of accomplishing.  Without leading hitter, senior Dylan Presnal (injured), at the top of the order, Deerfield managed to scratch out a 1-0 lead in the top of the first inning.  Gustavson shut down Cushing in the bottom of the frame.  In the second inning Cushing tied the score on an unearned run, and in the third inning the opponents cobbled together three more runs to take a 4-1 lead.  Gustavson remained composed, pitched courageously and well, and kept grinding through the 4th.   In the top of the 5th Deerfield put together their most stirring rally of the season.  Chris Camelio ’18 led off with an infield single, freshman catcher Eamon McNamara lined a single up the middle, and freshman “call-up” Jack O’Neil reached on a sacrifice bunt, fielder’s choice, to load the bases.  The top of the order took it from there.  Jared Pantalony ’18 drove in a run, reaching on a fielder’s choice.  Owen MacPhee ’18 pushed across the second run with a productive out, and Javier Irizarry ’19 contributed an RBI with a ground ball to the right side.  By the time the inning was over, Deerfield had erased the 4-1 deficit and stood tall with a 5-4 lead.  Gustavson took it from there.  The determined freshman shut down Cushing with the help of solid and spirited defensive play, including two outstanding plays by David Thomas ’20 in the final frame.  When a soft line drive settled into Jack O’Neil’s glove for the final out, Deerfield enjoyed the satisfaction of a hard-earned victory.  Gustavson’s complete game performance featured 91 pitches… 68 of them for strikes.

The Deerfield Academy baseball team won its first conference game on Saturday, April 8th with a 5-2 win against Cushing Academy at Headmaster’s Field.  Dylan Presnal pitched 4 2/3 innings for the win.  Jared Pantalony pitched effectively in relief surrendering no runs in 2 1/3 innings of work.  Javier Irizarry scored the first Deerfield run on a SAC fly by Sammy St. Jean in the bottom of the 1st.  Presnal also manufactured a run to support the cause when he reached by walking, stole 2B, stole 3B, and scampered home on an errant throw from the catcher.  The Big Green scratched out all their runs with aggressive base running and moving runners along.  Irizarry had an important RBI,  Cam Snow had a pinch hit RBI, and Chris Camelio took 3B on a fly ball to left field and eventually scored.  Sammy St. Jean, and Owen MacPhee made several good catches in the outfield.  Freshman catcher, Mat Gardner, caught a good game behind the plate.