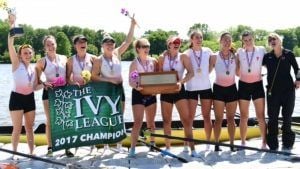 The 2017 NCAA Division I and Division III Women’s Rowing Championships will take place this weekend, May 26-28 at Mercer Lake in West Windsor, NJ and will feature 2 Deerfield rowing alumnae, Claire Collins ‘15 and Eileen Russell ’15. Claire and Eileen donned the green and white together only 2 years ago when they captured the NEIRA Championship and the National Championship in their senior seasons for the Big Green. 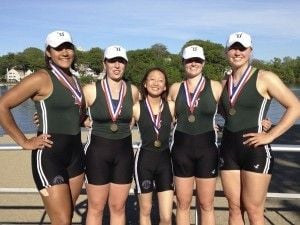 In her second year at Princeton, Claire Collins is the sixth seat of the varsity 8 boat (1V). She has enjoyed a successful and undefeated (11-0, 7-0 Ivy), thus far, sophomore campaign – claiming her second straight Ivy League title, earning First Team All-Ivy League honors and she was named to the U.S. Women’s U23 National Team Selection Camp. With these many accomplishments already in hand, Claire and the Tigers still have yet to race in their season culminating races at the NCAA Championships and the IRA Championships. Claire and the Ivy Champion 1V enter the NCAA Championships as the 4th seed and will take on Ohio State, Virginia, Notre Dame, Navy and Massachusetts in their opening heat on Friday, 5/26. The semifinal races are slated for Saturday and the grand final on Sunday. The NCAA is offering live coverage of this weekend’s race, click here to watch! Good luck Claire!

To read more about Claire;

US Rowing Women’s U23 Selection Camp

Eileen Russell ’15 is in her second year at Williams and holds the six seat of the varsity 8 boat. As announced last week, Eileen was named to the All-NESCAC First Team and will be joined at the NCAA Championship this weekend by 2 other NESCAC schools; Bates and Wesleyan. She and her Ephs teammates will face familiar foe Wesleyan in the opening round heat today and they will be joined by Ithaca and RIT. In their most recent outings this spring, the Ephs placed second at the National Invitational Rowing Championship and second at the NESCAC Championship. In a recent Williams article, head Coach, Kate Maloney describes her student-athlete by saying, “Eileen is one of the most self-possessed student athletes I’ve ever had the pleasure of working with in my time at Williams. She sets her goals and methodically makes strides towards achieving them. Her work ethic is consistent and strong and she provides a very even keeled temperment in her boat. But one should not underestimate her ferocious competitiveness — when she goes, the boat goes with her.” Click here to watch Eileen in action today at the NCAA Championship!

To read more about Eileen;