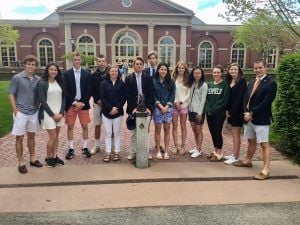 Sophomores Abby Bracken and Cate O’Byrne share the JV girls’ tennis Athlete of the Week title this week. Each day they bring an incredible level of positivity down to the courts, and are clearly motivated by their love of the game. Both players have improved a great deal this season as a result. Their willingness to do whatever it takes for the good of the team, whether jumping in the van for a match at the last second or collecting balls at the end of practice, truly makes them stand out. Their unflagging energy and enthusiasm for tennis and the team are incredibly appreciated by their teammates and coach, and we are so happy to have them in the group this year!

For four years, whether her team was struggling or succeeding, Ellie Koschik never allowed her teammates to surrender to frustration.  With grit and good cheer, she always encouraged everyone in the pool or on the bench that the best was yet to be.

After missing a few weeks due to injury, the JV Boys Tennis team welcomed Skye Bacon ’20 back onto the court. Despite his time off, Skye has played as if he never missed a beat, fortifying the team’s strength in the lower half of the ladder. Against Choate on Saturday, Skye teamed with Jackson Palmer to secure at win at #4 doubles. Against NMH on Monday, Skye teamed with Sevrin Sarachek to win at #3 doubles and followed that up with a nail-biting three-set victory at #6 singles.

Meghan Halloran had two excellent performances that served as critical factors in our victories over Loomis and Hotchkiss.   Meghan provided the Big Green with critical draw possessions that kept the tide of momentum rolling in Deerfield’s favor.  Of the 20 draws taken on the day, Meghan won 9.  She also scored 5 goals and tallied one assist across the two contests.  Mary Edmonds also emerged as an offense force over the last week as she amassed 7 goals and 4 assists within the Loomis & Hotchkiss contests.

Varsity Softball’s athlete of the week is Kat Hioe ’20.  In our last three games, Kat is 7-for-11 at the plate with 3 triples, a double, and 3 singles.  In our game against NMH, Kat belted a long ball to centerfield that missed the home run fence by about 2 feet.  Defensively, Kat has played three different positions for the Big Green this season, always ready to help out where we need her.  Thanks, Kat!  Keep up the great work!

Ninth grader Eamon McNamara has quietly stepped up and performed admirably at the catcher position in the past several weeks.  If pitchers sometimes dominate (which Henry Gustavson ’20 did against Cushing May 3rd), then credit also belongs to the catcher for guiding and managing the game.  A good catcher helps his pitcher and his team with reliability and confidence.  McNamara has provided just those attributes.  Eamon has also contributed nicely with his bat, as he is hitting the ball hard in important situations for the Big Green.  Congratulations to varsity baseball’s Athlete of the Week, Eamon McNamara ’20.

The athlete of the week for girls’ rowing is Sarah Jung.  Sarah stood out as the athlete of the week this week. She commits herself fully to not just the girls in her boat but everyone on the entire team. Sarah has been coxing for multiple boats during races for the past two weeks, showing her commitment and enthusiasm for the sport. She has grown tremendously as a coxswain and a leader throughout the season.

Scott went 5-0 in a busy week for boys’ tennis, and supplied two clinching singles wins: 6-0, 6-4 against Groton and 6-2, 6-4 against Choate. He also led the charge in our doubles sweeps of Choate and Williston; in the latter match he graciously moved down a spot to partner with a more inexperienced player.

Victoria Patterson ’20: Victoria won the 1500m in dominating fashion and came back to take second in a competitive 800m run.  Her time in the 1500m was good enough for #4 All-Time in Deerfield history, and it positions her to contend for a New England title in that event on May 20th.

Hughes Benjamin ’17: Hughes won both the 1500m and 3000m against archrival Choate in our annual dual meet, speeding his way around the oval in a lifetime best time in the 1500m and an easy win in the 3000m.

Notified on Saturday morning that he would be traveling with the team on Saturday afternoon to the Wayland Weston Invitational Regatta, Chris stepped up and performed at a high level with the Boys 5V.  Despite his late addition to the lineup, Chris helped the crew win their Sunday morning heat and then race to a very competitive 2nd place finish in the Grand Final, less than 3 seconds behind Belmont Hill. Chris’ competitiveness and composure helped to ensure that the change in lineup wasn’t a distraction for the crew as they pulled together to achieve a fantastic result.  Well done!

Matt pitched a great game against NMH on Monday, shutting down the Hoggers for six innings. He struck out ten and allowed only a few hits. For his hard work and ability to seize the moment, he is our AOTW.