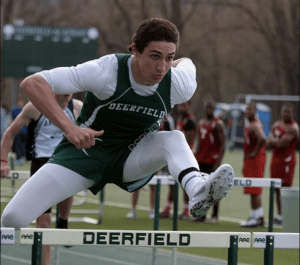 After two weeks of hard work and preparation, the boys and girls track and field teams will finally get a chance to compete as the team will travel to Andover, MA for a tri-meet with Andover and Taft on Saturday afternoon. With a number of new faces to the program looking to showcase their talents, we look back on the collegiate career of Jackson Shumway ‘12 who arrived at Stanford in the fall of 2012 and made a name for himself by refusing to give up and continuing to show up.

While at Deerfield, Jackson was an outstanding hurdler, helping to lead his team to an undefeated record and a New-England championship in the most heroic fashion. With the championship meet tied going into the final event, the 4X400 meter relay, and his team trailing when he received the baton as the anchor leg, Jackson cruised around the track, quickly reeling in the Loomis athlete ahead of him and earning his team the New England championship. Coach Schloat remembers him as “a relentless competitor who never shied away from a fight, whether it was a race or a tough practice or the longer arc of his career.  He was a solid hurdler as a 10th and 11th grader, but when he decided to be the best hurdler in New England as a 12th grader, he fought and clawed his way to that spot with implacable determination. I’ve encountered better all-around athletes, but I’ve never coached a fiercer competitor.”

Following an incredible track and field career at Stanford, the three-time All-American sat down with David Kiefer of the Stanford Athletics Department to discuss his many accomplishments. According to Jackson’s Coach Gabe Sanders, “He cemented his legacy as one of the greatest sprinters and leaders to ever don a Cardinal uniform.” To learn more about Jackson’s collegiate career and how he became an integral member of the Stanford track and field team, click here.