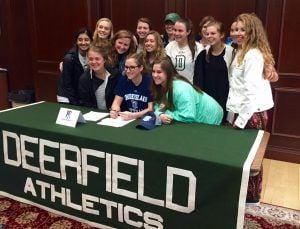 Today marked a special day for the varsity softball team as post-graduate student-athlete Ireland Miessau officially signed her National Letter of Intent to play D-I softball for the University of Rhode Island Rams, but even more thrilling for the program was the team’s collective road win at Worcester Academy, 9-5.

Ireland arrived at DA this fall as a post-graduate student out of East Haven, Connecticut. Prior to enrolling at Deerfield, she enjoyed an incredible softball career as a pitcher for the Lauralton Hall softball team. After splitting time as the starting pitcher for the majority of her sophomore and junior seasons, Ireland took over the starting job as 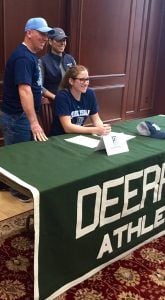 a senior at Lauralton Hall and put up some outstanding numbers. Posting a 20-6 record with an ERA of 0.97 all while striking out 245 batters over the course of 172.1 innings. What is even more impressive about Ireland, is her ability to cause trouble for opposing teams when she steps up to bat, the All-State pitcher also batted .319 with 2 home runs and 17 RBIs. Ireland’s coach at Lauralton Hall, Amanda Acampora described her as “a very intense, strong pitcher. She’s somebody that committed to the sport and bettered herself. She was voted as a senior captain by her peers and did a wonderful job. She became somebody that we could rely on in a stressful situation.” Despite only being three games into her lone softball season at Deerfield, Ireland has made her presence known, batting an incredible .667 and has posted 19 strikeouts and zero walks through 10 innings of work on the mound. In this Monday’s game against Stoneleigh, Ireland struck out 12 of 15 batters. Coach Sherburne and Coach Lapachinski explain, “What makes Ireland such a special player is not only her talent, but her selflessness. Ireland thinks of the team first before herself. When a player is struggling at the plate, Ireland offers that teammate pointers. When working with our three catchers, Ireland is patient and gives great suggestions, all the while having fun. She raises the level of play both on and off the field. And then there is her talent… when she is on the mound or at the plate you know good things will happen.” The Big Green softball team is off to a great start, posting a 3-1 record to start their season. We look forward to following Ireland this season and beyond!