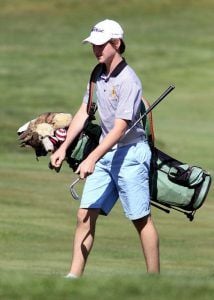 The varsity golf team swept Hotchkiss and Berkshire during their Wednesday match at the Ranch Golf Club.  The Big Green scored a team total of 399 and were followed by Hotchkiss with a 409 and Berkshire who collectively shot a 438.

Junior captain, Lowell Weil, led the way for the Big Green.  Weil shot the lowest score on the day with a 73, he was followed by his Hotchkiss and Berkshire opponents who each shot a 74. At the #2 spot for the Big Green, Kimberley Stafford finished with a score of 80 and immediately behind Stafford was Ben Hirsch (80). The 6 person team was rounded out by James Whiteley (83), Garrett Moe (83), and Danny Farr (89).

The team will return to action this weekend at the Newport Invitational which is set to tee off at noon.