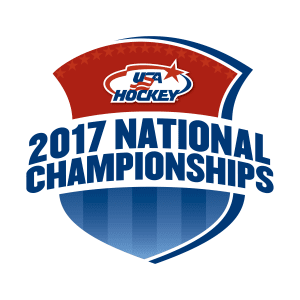 Deerfield girls hockey sent 6 players to the USA Hockey National Tournament in Detroit, MI last weekend with their club teams to compete for the National Title in their respective age groups.

Senior forward, Meghan Halloran competed for her club team the Mid Fairfield Connecticut Stars in the Girls Tier 1 U19 age bracket. Big Green and CT Stars teammate Jenna Greenbaum ‘17 cheered her teammates on from the sidelines as she was ineligible to compete in the tournament because she was studying abroad on the Deerfield sponsored trip to Jordan during the regional tournament. The Mid Fairfield Stars came up 1 goal short in the semifinal game to the eventual national champions, Shattuck St. Mary’s.

Also competing for the Mid Fairfield Connecticut Stars, in the Girls Tier 1 U16 age bracket was Christina Halloran ’20. The U16 Stars went 2-1 in round robin play at the tournament.

The Junior Eagles had 3 members of the Big Green on their roster in Deirdre Mullowney ’19, Ali Dougal ’18 and Mary Edmonds ’19. They competed for the title in the Girls Tier 1 U16 bracket and went 1-2 in a challenging round robin schedule, as they faced eventual national champions, Belle Tire.

Coach Pitt, girls varsity head hockey coach shared, “It has been a long hockey season for these six student-athletes, dating back to the beginning of their respective club seasons which started in the fall term. It is worth noting that each of these students committed to playing a fall sport for the Big Green while competing with their outside teams. I am proud of each of these girls for balancing their commitment to their schoolwork, Deerfield teams, and club team. Congratulations on a great season!”