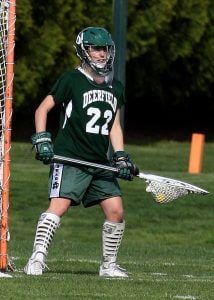 With only three games remaining in the regular season of her freshman year, Elliot Gilbert ‘16 and the Washington and Lee University women’s lacrosse team are the second ranked team in the nation according to the Intercollegiate Women’s Lacrosse Coaches Association (IWLCA). The Generals are 11-1 thus far on the season, with their only loss coming to Gettysburg back on March 11th. The team also leads the Old Dominion Athletic Conference with a perfect 5-0 record.

At Deerfield, Elliot was a four-year member of the varsity hockey and lacrosse teams, earning NEPSAC All-Star three times in lacrosse and serving as the team’s captain during her senior season. She was also a member of the soccer program at Deerfield for three years. Coach DiNardo remembers Elliot as “one of the most impactful players to come through the Deerfield Lacrosse program.  In her four years on the varsity team, Elliot’s outstanding performance in goal led the Big Green to countless victories. In addition to her excellence as a player, Elliot offered stalwart leadership as a senior captain.”

Through 12 games at Washington and Lee, the Bedford, NY native has been dominant, starting 11 games and boasting a .917 win percentage and a save percentage above .500. She has also helped her team outscore their opponents 144-52. Heading into this Saturday’s contest at Guilford, the team will look to build on their seven game win streak and gear up for a deep run in the NCAA tournament.