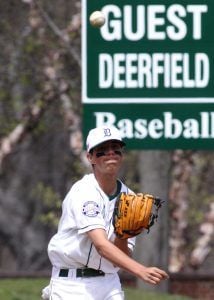 Varsity baseball starts the season strong going 2-0 in conference games and improving their overall early season record to 2-2. The Big Green defeated Cushing, 5-2, for their first conference win and won again this Saturday over conference rival NMH by a score of 9-7. The wins have resulted from collective team performances – at bat, on the mound and in the field.

The team’s first conference game on Saturday, April 8th resulted in a 5-2 win against Cushing Academy at Headmaster’s Field.  Dylan Presnal pitched 4 2/3 innings for the win.  Jared Pantalony pitched effectively in relief surrendering no runs in 2 1/3 innings of work.  Javier Irizarry scored the first Deerfield run on a SAC fly by Sammy St. Jean in the bottom of the 1st.  Presnal also manufactured a run to support the cause when he reached by walking, stole 2B, stole 3B, and scampered home on an errant throw from the catcher.  The Big Green scratched out all their runs with aggressive base running and moving runners along.  Irizarry had an important RBI,  Cam Snow had a pinch hit RBI, and Chris Camelio took 3B on a fly ball to left field and eventually scored.  Sammy St. Jean, and Owen MacPhee made several good catches in the outfield.  Freshman catcher, Mat Gardner, caught a good game behind the plate.

The Big Green pitching staff used five hurlers in a 9-7 conference victory over NMH this Saturday, April 15th.  Dylan Presnal got the start.  Griffin McDowell, Colman Shea, Nick Solberg, and Jared Pantalony supported the team in relief.  Shea got the win with 2 1/3 innings of work.  Freshman David Thomas came up big with the bat, going 4 for 4 with two doubles.  Dylan Presnal had a two doubles and triple.  Owen MacPhee delivered in the clutch as well with a SAC Fly RBI and a double.  Chris Camelio contributed two hits.

The Big Green continue conference play with the next three games against Worcester Academy and Tabor Academy (DH).