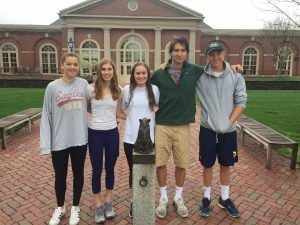 The Girls Lacrosse Player of the Week is Libby Wenners.  Libby is an outstanding defensive leader and continually pushes her teammates to improve in practice.  Her defensive strength and leadership were particularly impactful in our recent one-goal victory over NMH.

Ashley went undefeated through four matches in a stretch of seven days last week. She has performed well at first doubles as well as first singles for our team. A skilled volley and baseline player, Ashley wears her opponents down with relentless pace and closes matches out methodically. She keeps her head up when things aren’t going well and plays through setbacks. Ashley is a great competitor and has only demonstrated stronger play as the season has worn on.

Esme Benjamin has risen to a starting position and found great success as a newcomer to the team. She has registered multiple wins at second doubles and sixth singles. Esme’s approach and passing shots are second to none in terms of placement and consistency. Her opponents face an uphill climb due to her patient, strategic play. The future looks bright for this standout ninth grader.

Ally is an indispensable member of the girls’ JV tennis team. Her competitive spirit is truly impressive: twice this season already, she has played in exhibition matches against opposing schools’ varsity players and come away with victories. In a proset which exemplified Ally’s character as an athlete, she came back on Saturday from a 4-game deficit to defeat her Williston varsity opponent 8-5. As always, Ally stayed calm even when she was down, focused on her fundamentals, played strategically, and drew on her fitness to grind out a win. Besides the determination, mental toughness, and practiced skill which make her such an excellent player, Ally is a great teammate. She brings unfaltering positivity to practice and, through her willingness to hit with anyone and to offer help or ideas, improves the experience for everyone involved in the team. Ally is a leader and a true impact player on and off the tennis courts and we will miss her next year, even as we are excited to see where she goes after Deerfield!

Athlete of the week for girls’ rowing is Deirdre Mullowney. ​Deirdre dedicates herself to keeping a positive attitude on and off the water and is always there for others during their time of need.

John hit a towering home run against Avon on Saturday and has played a solid short stop for us all season. He is also a terrific spike ball player and won the first ever JV Baseball spike ball tournament with his partner Will Shuhda!

Joni has demonstrated a great deal of improvement since the beginning of the season. His movement up the singles ladder is a simple testament to that. Additionally, this past Saturday against Andover, Joni had two of the closest matches on the team. Pairing with Eli Ji ’19 at #2 doubles, Joni and Eli came back from a break down late in the pro-set to eke out at 9-8 win. In singles, Joni found himself in another close tie-break, playing a tough opponent at #3. Once again, Joni showed tremendous composure under pressure, winning the super-breaker 10-8, and securing Deerfield’s only singles win of the day.

Shooting a 70 on the day, Lowell was the team’s medalist for their match on Saturday, 4/22. Keep up the good work Lowell!

Senior Dylan Presnal took the mound against Tabor Academy on Saturday, April 22 in a competitive pitching matchup.  Despite taking the loss, Presnal threw 91 pitches in six and two-thirds innings of work.  He struck out six and walked 3 (2 in the final frame).  Presnal gave Deerfield a real chance at capturing the game against Tabor’s starter, one of the most highly touted pitchers in the conference.  He scattered 7 hits.  Presnal, a four year senior, continues to lead the Deerfield baseball team with his pitching, defense, and his bat.  He is currently the Big Green’s top hitter from the leadoff spot in the lineup.

In his first race with the varsity boys rowing program at Deerfield, freshman Jimmy Patton earned a seat in the first varsity four.  Showing great composure and toughness, Jimmy and his teammates put together a solid race, posting an 8 second win over Brooks, St. Mark’s, and Vermont Academy.  Jimmy has been a welcome addition to the squad this spring and we look forward to his continued development in the coming weeks.

Playing hard to the last second even in the face of defeat, Bailey Smith demonstrated her commitment to relentless effort.  She also continued to lead the team in scoring.

This week the JV lacrosse team would like to recognize Brenna Hoar ’18 for her hard work and dedication to improving both on and off the field. In both of our games this past week against NMH and Taft, Brenna worked hard all over the field and held herself to a high standard of toughness but also exhibited a lot of grace toward the other team and the referees. Coaches look forward to her continued success as a midfielder, especially for her hard shots and her hustle to the ball.

Boys AOTW: Andres Milmo. Andres stepped into a shuttle hurdle relay at the Hunt Relays with no hurdling experience and helped his two hurdling teammates earn a big win!

Girls AOTW: Mina Liang. Mina stepped into the 400m leg of the Distance Medley relay at the Hunt Relays, which was her first career 400.  She ran bravely and helped that team set a new school record in the event. 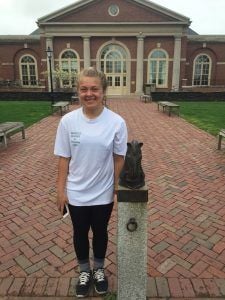 Softball’s athlete of the week is Erin Tudryn. Last week she roped a double down the 3rd base line against Taft and was poised to tie up the game for us. Throughout the last week Erin has worked her butt off in practice both at the plate and in the field. There isn’t a fly ball in her general vicinity that she can’t catch. She gives 110% at each practice and has the best attitude. Simply put, she’s awesome!