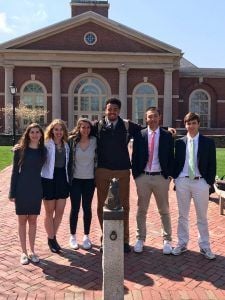 Olivia Jones was named the Varsity Girls Lacrosse Player of the Week.  Olivia has emerged as a defensive anchor for our team and offered a particularly strong performance in our rival contest against Choate.

Helena Tebeau is the JV girls’ tennis athlete of the week. Despite sickness at the beginning of the term, Helena came in to the first week of team practices fired up and competitive. She won eight challenge matches to secure a spot at #2 on the ladder. Helena capped off a week of hard work in practice with a tenacious match against Taft on Saturday. She stayed remarkably focused and intense over two long sets and a tiebreak game to give Deerfield a win. Drawing on her mental strength and fundamental tennis skills, Helena refused to give up easy points, worked hard to get to every ball, and defeated her opponent with intelligent, strategic play.

Freshman David Thomas ’20 stood out in Deerfield’s 9-7 win over NMH on Saturday, April 15th.  The first year infielder went 4 for 4 with 3 RBI, and 2 doubles.  He also scored two runs and stole a base.  Thomas has played three infield positions in games thus far: 3B, SS, and 2B.  He also contributes to the pitching staff.

Our two athletes of the week are Dallas Hobbs and Felicia Renelus.

Dallas won the shot put and took second in the discus at Andover, facing off against one of the top throwers in New England.  His marks on Saturday catapulted him to the #2 spot on both of Deerfield’s all-time performance lists for the shot and discus.

Suzy had a great week on the softball field. She won two rounds of last man standing due to her speed and ability to catch countless fly balls. Suzy’s strong performance during practices was matched in her performance against Choate on Saturday.  She went 3 for 5 at the plate and was flawless in her fielding. Suzy also gives 110% at every practice and her determination to improve and help the team makes her our athlete of the week.

Sophomore Monet Meyer moved from the diving well in the winter to the main pool this spring and immediately accepted the challenges of learning water polo as a starter and key substitute.  The valuable experience she gains this season will help her to play leading roles in the coming years.

The athlete of the week is Emma Reavis. She shows up to practice everyday with a smile on her face, ready to face and triumph over any challenge. Her hard-working ethic is contagious to everyone on the team. Congrats Emma, and keep the enthusiasm going!

Alex Alijani ’19 had a strong weekend for the JB Boys’ Tennis team. Playing a tough Taft team, Alex had a role in the Big Green’s two points of the day, earning a 8-2 at #1 doubles with Jeffrey So ’19 and showing similar grit and talent picking up a 7-5, 6-2 win at #3 singles.

Sai’s eager approach to the game of baseball and dedication to his own improvement has been on full display this season. During our game against Williston on Saturday, Sai hit a rocket to the gap in left-center field—easily the best hit for either team on the day. His play in the field at second base continues to improve and clearly he is more comfortable at the plate. We are excited for big things from Sai this spring!