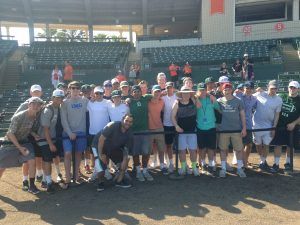 It was a day of progress and enjoyment for Deerfield baseball on Wednesday, March 22. The squad played its third game in the IMG Classic against Christ Presbyterian School of Nashville, TN.  Though the squad lost 2-1, the outing proved to be a significant step forward in the development of the team.  Jared Pantalony ‘18 pitched 5 no-hit innings, shutting down a talented lineup.  Henry Gustavson ’20 pitched the 6th and also threw well.  The Big Green took a 1-0 lead in the 4th on a leadoff single by Javy Irizarry ‘19 and a sacrifice bunt by Dylan Presnal ‘17.  David Thomas ‘20 singled to move Irizarry to 3rd.  Sammy St. Jean ’18 picked up the RBI with a ground ball to the right side.  The Big Green had two other opportunities to score, with runners thrown out at the plate by way of good defensive plays by their opponents.

In the afternoon, the Deerfield boys traveled to Sarasota to take in the pre-game and exhibition game between the Baltimore Orioles and the Tampa Bay Rays.  Oriole General Manager, Dan Duquette, invited the entire entourage onto the field for batting practice, where they observed, up-close, the Orioles taking their pre-game swings.  The team continues with games on Thursday and Friday before heading north for the weekend at the New England Baseball Complex in Northborough, MA.