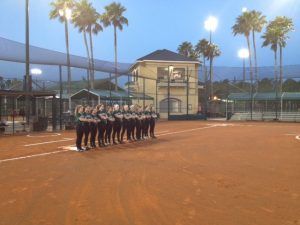 The Deerfield Academy softball team opened their 2017 season today with a couple of preseason exhibition games at the ESPN Sports center in Orlando, Florida. The team arrived in Orlando on Sunday and after two practices on their first day in town Monday they played Northern Valley Demarest from New Jersey and Dana Hall from Weston, Massachusetts today.

The early morning game against Northern Valley Demarest would prove to be a great challenge for the young Deerfield team. Demarest, New Jersey state champions in 2016, was deep in talent and came ready to play. However, it was Deerfield jumping out to an early 2-0 lead off timely hits from Ireland Miessau and Meagan O’Brien. Ireland was strong on the mound keeping the defending champions off the scoreboard for the first couple of innings. It wasn’t until the 3rd inning that Demarest was able to string together several hits, and this combined with a few early season fielding errors put the Deerfield team behind from that point on. The final score was 11-2 as Miessau stayed strong on the mound throughout the game with a pitch count that climb well over 100. She struck out 11 on the outing.

Less than 20 minutes later Deerfield was back at it again for their second game. This time the team faced Dana Hall. Junior Meagan O’Brien was on the mound for this game and she started the game well giving up just a single run in the first. When Deerfield came up to bat in their half of the 1st their offense began to bubble scoring 3 runs right away. The entire batting order would contribute to the effort in game two. By the middle of the 5th inning Deerfield’s 16-4 margin caused the game to end. O’Brien was strong on the mound in game two while also going 4-4 at the plate. On the day, Ireland Miessau went 7-8.

The team returns to the field this afternoon for another practice session. Then Wednesday they will take on the St. Benedict Lady Eagles from Tennessee in a morning doubleheader. The team is getting a lot of good work done with their days in Florida. They will return home to snowy New England on Thursday.