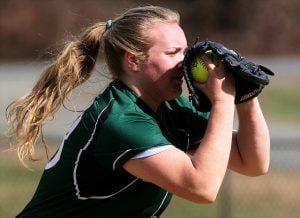 The Deerfield Academy softball team concluded their spring preseason Florida trip this morning playing a pair of games against Lady Eagles from St. Benedict School in Tennessee. Deerfield dropped both games but picked up a lot of valuable playing experience against a very good team today.

In game one Ireland Miessau was on the mound and once again she pitched very well striking out 10 more batters and only allowing 2 earned runs in the team’s 8-4 loss. This was a good back and forth game as both teams played solid defense, had good pitching, and timely hits. The score remained tied deep into the game until St. Benedict’s was able to string together a few hits combined with a few infield errors from Deerfield to increase their lead.

The second game was a different story. Meagan O’Brien was on the mound for her second start of the season after yesterday’s win over Dana Hall. She pitched well, but unfortunately St. Benedict’s bats continued to roll from the late innings of game 1. In the first two innings of the second game Deerfield didn’t help their cause while committing 7 errors. Quickly St. Benedicts had a commanding 10-0 lead and before the game reached the fifth inning they had stretched their lead to 15-0.

It’s been a good start to the season despite the outcome of their final preseason game. The girls made great strides in their first four games and this experience will help bring good results when their season officially begins on April 1st playing at home against Stoneleigh Burnham. See you there!