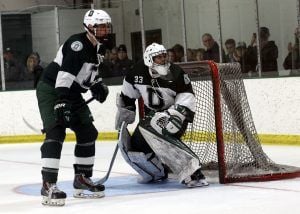 Justin Marler ’17 was selected to the 2nd Team All-New England team in the West. Despite battling injuries throughout the season, Justin was a steady presence on the blue line during the 2016-17 campaign. He led the Big Green defense in scoring, playing both on the power play and penalty kill. He is as physically dominant of a defenseman as Deerfield has seen in a long time.