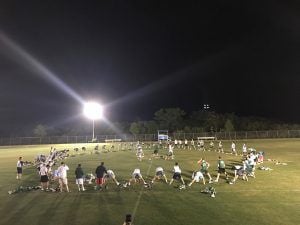 During the second week of spring break, the Deerfield boys lacrosse program took their pre-season trip to IMG Academy in Bradenton, Florida where they escaped the cold New England weather for a week of blue skies in the Sunshine State. Throughout the course of the week, the sixty-three boys who made the trip would take part in fourteen sessions which included practices, intrasquad scrimmages and two scrimmages against New Hampton and Milton. The team was also afforded the opportunity to enjoy practices led by former Deerfield standout Rob Pannell ‘08 who went on to set numerous Cornell, Ivy League and Division I lacrosse records on top of winning the Tewaaraton Trophy in his senior season which is awarded to “the most outstanding American college lacrosse player.” Tom Kelly, who currently plays in the Major League Lacrosse (MLL) for the Denver Outlaws and played lacrosse at the University of Virginia, also made the trip to help work with the team’s faceoff specialists. The team also had the opportunity to watch Alex Killorn ‘08 of National Hockey League’s (NHL) Tampa Bay Lightning hit the ice against the Arizona Coyotes at Amalie Arena. After a week of hard work, the boys are ready to get the season started this Saturday when both the Varsity and Junior Varsity teams make the trip to Brunswick.