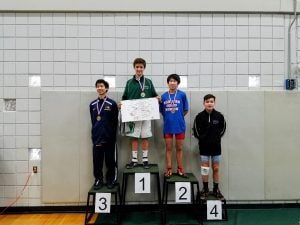 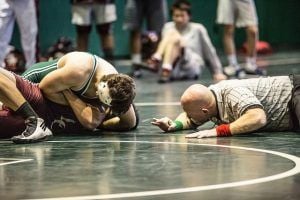 Will Shuhda ’17 competing in his senior season on the mat for the Big Green!

Leading the way was Henry Hayden ’18 who wrestled his way to winning the 106-pound weight class. Griffin Thomas wrestled very well losing in the championship round in the 195-pound bracket. The team showed good depth having three members place 4th in their respective weight classes; John Chung ‘20 (113 lb.), Will Shuhda ’17 (170 lb.), and Brandon Scott ‘17 (285 lbs.). 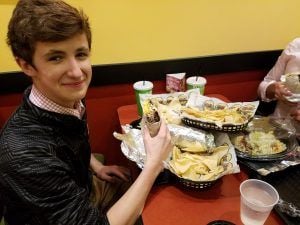 Henry H. ’18 pinned his Wilbraham & Monson Academy opponent in 1 minute 51 seconds to become the 106lbs Class A New England Prep School champion, Deerfield’s first since Griffin T. ’17 in 2015.  Henry summarily ran through his opponents on the mat, but it was the effort off the mat, in practice and in the dining hall, that defined his run.  Deerfield had an opening at that weight division this season and Henry committed to reaching the weight by training hard and abstaining from scrumptious dining hall deserts.  He ended the Class A season with a “Michigan” pin, a move he worked hard to develop through the season.  After the tournament, Henry indulged in a “little bit” of food with the rest of Deerfield Wrestling.

Honorable mention goes to senior and team captain Griffin T. ’17 whose victory over his Exeter opponent in the semifinal was the story of the day.

The coaches are proud of our team this season.