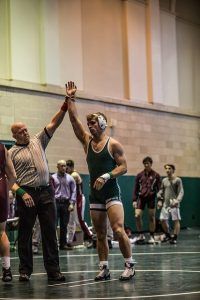 Griffin Thomas '17 victorious at a home match in his senior season.

Three Deerfield wrestlers, Henry Hayden ‘18, Will Shuhda ‘17 and Griffin Thomas ‘17, made their way to the medals podium over the weekend at the New England Wrestling Tournament. As place-winners, each qualified for the National Prep Wrestling Tournament at Lehigh University this coming weekend.

Before being eliminated, both John Chung ‘20 and Mohamed Kadry ‘17 each won a match by a fall.

Watch highlights of Deerfield wrestlers in action at the New England Championship. Video is courtesy of Connor Finemore ’18. Thanks, Connor!