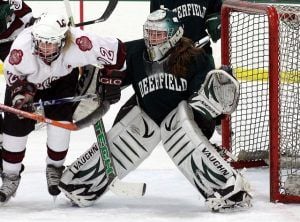 Shenae Lundberg '11 in her senior season at Deerfield vs. Loomis.

Former Deerfield hockey goalie Shenae Lundberg ‘11 continues to shine between the pipes as a member of the Connecticut Whale, one of four teams that make up the National Women’s Hockey League (NWHL). The NWHL is the first professional hockey league for women to pay its athletes in North America and is currently in the midst of its second season.

Prior to playing professional hockey, Shenae spent four years as the goalie of the Deerfield girls varsity hockey team, serving as an Assistant Captain during her senior season and earning the team’s MVP award. She was also a member of the U-18 USA World Championship team in 2011 and was selected to USA Hockey’s Player Development Camp from 2007-2010. Off the ice, Shenae was a key contributor to the girls Track and Field team, qualifying for New England’s in the discus throw both her sophomore and junior seasons. She also lettered in Field Hockey, serving as the team’s starting goalie and tied the school record for most saves in a game.

Upon graduating from DA, Shenae began a successful collegiate career at Union in Schenectady, NY. After appearing in fourteen games as a freshman and earning a spot on the ECAC All-Academic team, Shenae became the team’s starting goalie, appearing in 28 games as a sophomore, 32 as a junior and in all 34 contests as a senior. Despite a losing record in her Senior season, Shenae etched her name into the Union record books. Her 1,110 saves in her final year led the nation and put her second all-time in school history and sixth all-time at the NCAA Division I level. That same year, she set an NCAA record for most saves in a shutout with 59 in a win over Northeastern. By the end of her career, Shenae had compiled a school record 3,023 saves, becoming only the 21st women’s Division I hockey goalie to join the 3,000 saves club. She was also awarded the Robert D. Ridings Memorial Award, “given to a Union senior women with an outstanding display of attitude, ability, participation and achievement.”

After a very successful collegiate career, Shenae signed a contract with the New York Riveters of the NWHL. On January 27th, 2016, Lundberg made history once again, having played only one game with the Riveters, she was traded to the Connecticut Whale. The trade was the first in NWHL history and saw Lundberg traded in exchange for Whale goalie Chelsea Laden. In her second season in the league, Shenae continues to make a name for herself as the Whale look to turn their season around and make a push for the Isobel Cup, the league’s championship trophy, named after Lady Isobel Gathorne-Hardy, the daughter of Frederick Stanley, the donor of the NHL’s Stanley Cup.