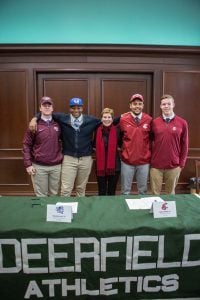 Brandon, a native of Hyde Park, MA arrived on campus as a sophomore in the fall of 2014. He has been an active member of the Deerfield community in more ways than one and has become one of the Academy’s student leaders. His charismatic demeanor and willingness to put others before himself is demonstrated by the fact that he serves as a captain for three varsity sports, including football, wrestling and track as well as serving as a proctor in Scaife dorm. On the football field for Deerfield, he played on both sides of the ball as an offensive and defensive lineman, earning First-Team All-Central New England honors on offense. His talents as a football player and positive personality have helped him earn a full-scholarship for football at Central Connecticut State University. Brandon’s presence on campus will be missed next year. Good luck Brandon and Go Blue Devils! Matt Donovan of Shrewsbury, MA came to Deerfield as a postgraduate student via Worcester Academy.  At Worcester, he served as a team Captain during his senior season, leading the Hilltoppers to a 5-3 record. This fall, Matt played on the offensive line for Deerfield and helped the Big Green defeat his alma mater by a score of 13-12 in a tight contest. Matt’s hard work helped him earn Second-Team All-Central New England honors on the offensive line. Upon graduating from Deerfield in the spring, Matt will take his talents to Fordham University in the Bronx, NY where he has committed to play football. Go Rams! Dallas arrived at Deerfield this fall as a postgraduate student from Cedar Rapids, Iowa and was a force to be reckoned with from his first snap for the Big Green. Playing primarily as a defensive end, Dallas’ dominance over opposing offensive lines earned him All-Central New England Defensive Player of the Year as well as All-New England Honors. He is also a member of the Deerfield boys varsity basketball team and plans to throw the shot put in the spring. Next fall, Dallas will be playing for Washington State under Head Coach Mike Leach. Washington State is a member of the PAC-12, one of the nation’s best football conferences including programs such as Oregon, Stanford and USC. Go cougars! An Exeter, New Hampshire native Hunter Long came to Deerfield as a postgraduate student out of Exeter High school. Hunter enjoyed a great season with the Big Green, averaging 16.8 yards per catch on 30 receptions for 504 yards and two touchdowns. Those numbers helped Hunter pick up All-Central New England 2nd team honors on the offensive side of the ball playing as both tight end and wide receiver. Hunter has been verbally committed to Boston College since the summer. Much like Dallas, Hunter will be playing in one of the nation’s most competitive football conferences, the ACC, which includes recent National Champions the Clemson Tigers. Go Eagles!