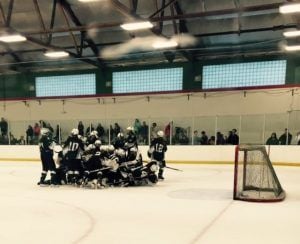 The team celebrates after the memorable win!

The girls varsity hockey team defeated Williston 3-0 to earn a win for their final game in the Barn!

There was plenty to play yesterday afternoon against a strong Williston squad, since not only was this the team’s last home game of the year, but also their final chance to compete in the beloved Barn. After honoring the five Seniors, the team settled into a good rhythm, determined to match Williston’s speed and strength. The home team struck first, with Margaret Williams ’19 firing in a beautiful shot from the slot (Erin DeMarco ’19 and Shai Lineberry ’17 earned the assists), which galvanized an already pumped up bench. The Big Green doubled their lead in the second period, as Meghan Halloran ’17 intercepted the puck at the blue line and got the puck toward the net. Christina Halloran ’20 got it loose for Aurora Devereaux ’20, who deposited her own rebound in the back of the net. The team pushed their lead to three shortly thereafter on the power play, as nice patience by the elder Halloran on the half wall gave Deirdre Mullowney ’19 an open land toward goal, and she made no mistake in blasting a shot home from the point. This would complete the scoring for the day, as the defense of Mullowney, Ali Dougal ’18, DeMarco, Ali Fujiyoshi ’19, Libby Wenners ’17, and Meaghan O’Brien ’18 did a fabulous job of keeping Williston to the outside and moving the puck out of the zone under pressure. Our penalty kill was also outstanding today, as Halloran, Mary Edmonds ’19, Raegan Hill ’19, and Mae Emerson ’19 played smart and composed hockey. Liv Mikesell ’20 was outstanding in goal with 26 saves. This was another incredible team win, and great validation for a group of athletes who have poured their heart and soul into this season. The team will finish off the regular season on the road against Loomis on Saturday.