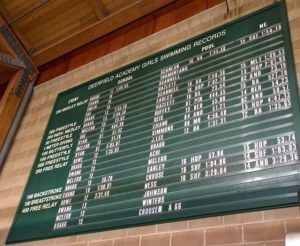 Jenner McLeod ’13 and Liza Bragg ’13 are both in the midst of their senior swimming seasons at their respective colleges. After enjoying stellar high school careers in which both set numerous Deerfield Academy individual and relay records in the Koch natatorium, the two women have gone on to enjoy incredibly successful collegiate careers. 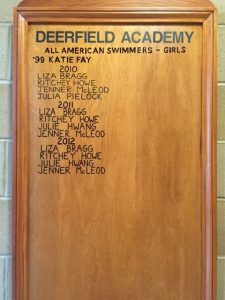 At Duke, Liza focuses on the backstroke and the IM and has etched her name into the school’s record books over different distances and strokes. She holds the school record in the 200 backstroke, completing the race in 1:57.54 and finds herself in Duke’s all-time top ten in the 200 and 400 IM. On top of her success in the pool, Liza has earned several academic distinctions, being named to the ACC Academic Honor Roll in 2014, 2015 and 2016 and was a College Swimming Coaches Associate of America Scholar All-American Honorable Mention in 2014. 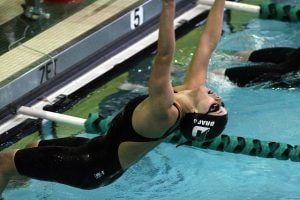 Liza Bragg ’13 at the Regional Swimming Championship in Koch Pool on March 4th, 2013.

Jenner, who currently swims for Kenyon, has enjoyed success at the next level, as well. The college senior is a part of three school records as a member of the 200 freestyle, 400 freestyle and 200 medley relay teams. On top of her success in the relay events, Jenner is also in the school’s all-time top ten in the 50 and 100 individual freestyle. As well as enjoying an impressive individual career at Kenyon, Jenner has been able to enjoy some incredible accomplishments with her team. Last winter, the Kenyon women’s swimming and diving team fell just short of a National Championship as they were edged out of first place by seven time defending Champions, Emory University. 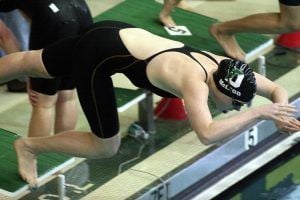 Jenner McLeod ’13 at the Regional Swimming Championship in Koch Pool on March 4th, 2013.

At Deerfield, McLeod ‘13 and Bragg ‘13 served as co-captains during their senior seasons and earned numerous All New-England and All-American honors as members of the Big Green. If you take a moment to look up at the record board in the Koch Natatorium, you will quickly realize influence that these two individuals had on the history of girls swimming at the Academy. 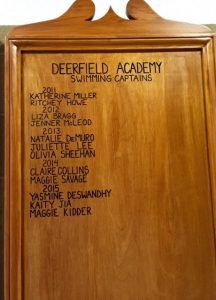 We look forward to cheering you both on during your upcoming conference and NCAA championships! Good luck!