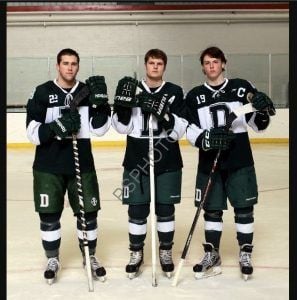 Three former Big Green hockey players have made a name for themselves in one of college hockey’s most competitive leagues, the East Coast Athletic Conference (ECAC). Ben Masella ‘12 is currently in his senior season and is serving as an Assistant Captain at St. Lawrence where his team is currently ranked 19th in the country. Trevor Yates ‘14, is now a junior at Cornell and is tied for most points on his team with 9 goals and 9 assists for 18 points through 24 contests. Cornell currently sits at 13th in the national polls. Lastly, Sam Lafferty ‘14, Yates’ classmate, was elected an Assistant Captain as a junior and has posted some impressive numbers throughout his first three years with the Brown Bears as he too currently leads his team with 30 points through 25 games. 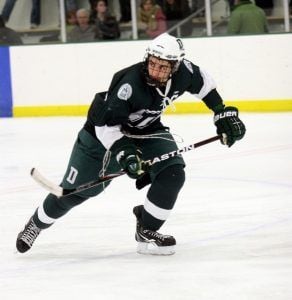 Ben Masella ’12 playing at home in his senior season.

Masella ‘12, arrived at Deerfield as a junior from Montreal, Canada and made an immediate impact on both the community and the ice. Following a successful first year at DA, he was named the boys varsity hockey captain for his senior year and played an important role at both ends of the ice, acting as a shutdown defenseman while also proving to be a key contributor to the team’s power play. After graduating from Deerfield, Masella spent a year playing juniors with the Chiliwack Chiefs in the British Columbia Hockey League (BCHL). At St. Lawrence, he has been a crucial member of the team’s defensive core and has helped lead his team into the nation’s top 20, a position they have held for most of the season. With four games remaining in the regular season, Masella and the Saints sit fourth in the ECAC. With a strong showing down the stretch and in the playoffs, the team will look to work their way into the NCAA tournament. 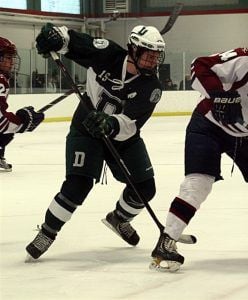 Trevor Yate’s vs. Avon in his senior campaign.

Yates ‘14, also from Montreal, spent three years at Deerfield as a member of the boys varsity hockey team. He posted 104 career points as a member of the Big Green, 48 of which came as a senior when he also served as an Assistant Captain. Following a successful high school career, Yates picked up right where he left off, scoring a goal in the second period of his college debut against Omaha. After posting 17 points over the course of his first two seasons, he has enjoyed an incredible junior year, having already put up 18 with four games to go in the regular season. Much like Masella and the Saints, the Big Red are set to make a deep playoff run and hopefully earn one of the sixteen spots in the tournament. 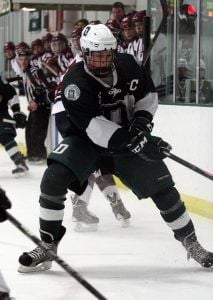 Sam Lafferty ’14 winning the puck along the boards vs. Avon.

Lafferty ‘14, enjoyed three years of hockey at DA, serving as Captain his senior year while also leading the team in scoring with 21 goals and 34 assists for 55 points in only 25 games. His incredible senior year helped him earn a spot on the All-New England team and more impressively, it caught the eye of NHL scouts as Lafferty was drafted by the Pittsburgh Penguins in the fourth round of the NHL draft that summer. At Brown, he has not missed a game through his first three seasons and has put up 52 points in 87 games. This season, he currently ranks fifth in scoring in the ECAC and is averaging 1.22 points per game. As a result of his impressive numbers, The Gridiron Club of Greater Boston has named Lafferty one of 23 finalists for the 65th Annual Walter Brown Award, “presented annually to the best American-born college hockey player in New England.” This award is the oldest nationally recognized honor, having been presented for the first time in 1953.

There are currently four ECAC teams represented in the nation’s top 20 rankings and two of the last four national champions were ECAC teams. Considering the strength of the conference, it is remarkable to think of what these three alums have been able to accomplish at the next level. Hopefully, their hard work and dedication to their sport and their academics can act as a benchmark for current Big Green student-athletes to aspire to.