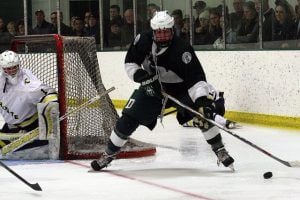 After a tough five game stretch that saw the boys varsity hockey team struggle to find the back of the net, the team rebounded this weekend going undefeated with back-to-back games on Friday and Saturday.

On Friday evening, the team travelled to nearby Williston Northampton for a 6 PM puck drop. Williston has had an impressive season thus far with key wins over Salisbury and St. Sebastian’s. Despite a talented opponent, the Big Green came out firing on all cylinders and were rewarded with the game’s opening goal midway through the first frame. The marker was the result of a great individual effort from Mikey Holland ‘19, who hustled back into Deerfield’s defensive zone, intercepted a Williston pass, carried the puck through the neutral zone and set up Chad Haggerty ‘17 just inside the Williston blue line to put the visitors on the board. The Big Green would double their lead just over a minute into the second period when Danny Farr ‘17 sent Jon Donville ‘17 in on a breakaway, Donville ‘17 would make no mistake tucking the puck into the bottom right corner of the net. Before the second period was over, Williston would find their first of the night on the power play, but Justin Masella ‘17 would get the goal right back when he launched a missile that beat the Williston goalie from the blue line. In the third period, Williston would once again pull the game to within one but some late key saves from Sam Vigneault ‘17 would help DA hold on for a hard-earned win on the road. Vigneault ‘17 made 39 saves on the night.

Less than 24 hours later, the boys were once again lacing up their skates to go to battle. However, this time around, they would be suiting up for what would be the final boys varsity hockey game in the Barn, as they took on 5th ranked Exeter. From the first faceoff, there was no sign of tired legs from Friday night’s contest, as the Big Green were aggressive in the offensive zone and earned the game’s first goal as a result. Assistant Captain Wiggle Kerbrat ‘17 forced an Exeter defenseman to make an errant pass that found the stick of Danny Farr ‘17, who buried the puck past the surprised Exeter net minder. After a scoreless second period, Exeter would find the equalizer on the man advantage with 10 minutes to play in the final period. With the game tied at one at the end of regulation, the teams would play a final 5-minute overtime with neither team managing to net the game winner.

With a win over Williston and a tie with #5 Exeter, the team regained a sense of confidence in their play that will lead them into the final week of the season, which sees them take on Kent on Wednesday and Westminster on Saturday.