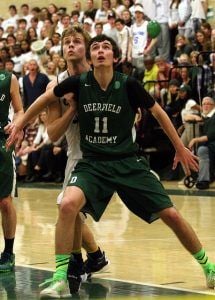 The boys varsity basketball team won in thrilling fashion on senior night. After honoring the team’s seniors, the boys tipped off against Andover in what would be one of the most exciting contests across any sport on campus this year. With the visitors leading by a slim three point margin at half-time, it was clear that it would come down to the wire. For much of the night, DA was led by Captain Jackson Mannix ‘17 who put up 23 points, Jackson Pitcher ‘19 who posted 18 and Dallas Hobbs ‘17 who had 10 of his own. However, with time winding down, and the Big Green trailing by a single point, it was Kaleb Robinson ‘17 who stepped up and hit the most important shot of the game. After a missed Deerfield layup with five seconds to go left the ball bouncing towards the baseline, Hobbs ‘17 made a great play to keep it in bounds, tossing it back beyond the arc to a wide open Robinson ‘17 who nailed the three pointer as time expired. The three point shot would be Robinson’s ‘17 only three points of the day and they came at just the right time. Check out the final moments in the video below.