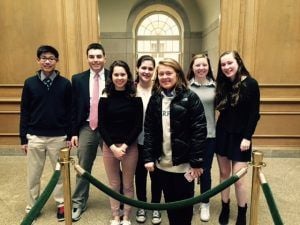 Finishing 2nd at the NEPSAC Class A Alpine Skiing Championships.

The girls JV hockey player of the week is Hannah Swinerton ’17. Hannah has been tremendous in net for the JV squad this season. She works hard at practice and improves every time she steps on the ice. Hannah had one of her best games of the season this past Saturday against Hotchkiss. Hotchkiss was a talented team but they were no match for Hannah. She made some unbelievable saves and earned herself the shutout in the team’s 1-0 win against the bearcats. We will greatly miss having Hannah in net for us next season but congratulate her on a stellar career with the girls JV hockey team!

The boys varsity hockey athlete of the week goes to Sam Vigneault ’17 for his stellar performance in last Friday’s game against Williston Northampton. In a contest that DA could not afford to drop, Sam played his best game all season, making 39 saves on the night. The team rallied behind the senior and earned a 3-2 victory on the road.

With her team in an early 2-0 hole against Exeter, Audrey McManemin was up at #2 looking to gain our team’s first point. After four very tight games, the match was tied at 2-2. After falling behind 10-7 in the last game, Audrey won an incredible five points in a row, clinching the game and match 12-10 in the fifth and earning our team’s first point of the day. What an incredible display of grit and perseverance!

Mary Edmonds is GV Hockey’s Athlete of the Week. Mary had a hat-trick against Cushing, including a beautiful short-handed goal, and added another against Hotchkiss. All season long Mary has been a model of consistency, keying our penalty kill and providing an offensive spark. Mary brings her very best to rink each and every day, and is an outstanding competitor. She is an absolute force to be reckoned with.

Our Athlete of the Week is Erin Tudryn, who is coming off of a stellar offensive performance against Wilbraham and Monson last week. In our final regular season home game this year, Erin lead Deerfield with an impressive 23 points, shooting 9-for-20 from the floor and 4-for-5 from the free throw line. Erin seemed to score at will during the game, consistently hitting 15-foot jumpers and finishing strong in the lane to convert numerous three-point plays. We look forward to more great shooting and strong play from Erin in the final week of the season!

For the second time this season, Katie Parker showed her mettle and came away with a valiant victory in the fifth game.  Playing #6 for Deerfield in the varsity team’s away match against Exeter this past Saturday – up 4 spots from her usual position as #10 – Katie won her first game, then fell short in her next two games, falling behind in her match 1-2.  Then, with great grit, Katie pushed even harder and with smart shot placement and determination to get every ball, she won the next two games, giving the varsity squash team the win it needed to keep alive the team’s hopes for an undefeated record in regular season play.

Jeffrey Sun ’17 showed great heart and leadership this past weekend in a narrow loss to Loomis. Even while not at full strength, Jeff managed a lifetime best in winning the 100 fly, and true grit in a tight race in the 100 breast. His willingness to step up when called on for any event is commendable.

Orlee Marini-Rappoport:  For great swims this season – dropping almost 40 seconds in her 500 free this season!

Melisa Gurkan: For being a fun, inclusive and inspirational teammate.  She keeps everyone in great spirits!

Evan Santos is our athlete of the week for Boys Varsity Basketball.  He has been a spark off of the bench for us this season, providing timely scoring and energetic defense.  He’ll get his first start of the season this afternoon against Andover.