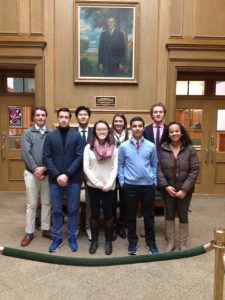 With our match against Suffield’s JV team knotted in a 3-3 tie, it all came down to Matthew in the #5 position. He caught fire after going down 2-1 in games, giving up only six points in the last two games to win in five and clinch a 4-3 victory for us!

Once again, it is very difficult to choose just one member of GV Hockey to honor as our Athlete of the Week. After a tough loss on Wednesday, the whole team rallied with impressive energy and spirit, making for two great days of practice and a fantastic win against a strong Berkshire team. This is an incredibly committed and dedicated group of athletes, and they have demonstrated character and resilience at every turn. There are so many individuals that deserve to be singled out for their leadership, improvement, attitude, and on-ice performance, but ultimately we will honor Meghan Halloran ’17 this week. A two-year Captain, Meghan has been a key player for us for four years. Most of our offense runs through her, and she has never hesitated to put the team on her shoulders when we need a spark. The Berkshire game was a perfect snapshot of her career: she was dangerous all over the ice, netted a goal and two assists, created numerous other scoring chances, and was outstanding on the penalty kill. Meghan is a force to be reckoned with, and we are so appreciative of all that she’s done for our program during her outstanding Deerfield career.

Our athlete of the week is Alexia Baker. Over the course of the last week, Alexia has really elevated her level of play in practice. She has worked hard every single minute of practice, made solid decisions on the court and finished a lot of shots. Additionally, on multiple occasions, it has been Alexia who has stepped up to knock down big free throws to conclude our practice. Her high level of play has been noticed by her coaches and has inspired her teammates to play equally as hard. We have loved watching Alexia develop this season, and we are looking forward to more great things out of her during the remainder of the season!

This week’s boys varsity hockey athlete of the week goes to Jon Donville ’17 for his willingness and ability to take on whatever role the team needs him to play. Since day one of preseason, Jon has put the team before himself and has pushed his peers to be better every day. In a tight contest at Avon this Saturday, Jon scored with 30 seconds to go to bring us within one goal of the hosts. Keep up the great work!

Dallas Hobbs has been a mainstay at the center position after joining the varsity team in January.  He played an excellent game against a strong, athletic Exeter squad last weekend.  For the game, he led our team in rebounding and score a couple of key buckets from the low block position.  He possesses a rare combination of power and athleticism that enables him to compete with the best centers in our league.

For Boys swimming our athlete of the week is Simon Lam.  Simon has been a key contributor to the boys team all season and in our win against Hotchkiss Simon achieved two personal best times. He swam 1:49 in the 200 Freestyle and 52.63 in the 100 Butterfly, the latter time being the 5th best time in New England’s this season.  Simon also was a key member of the winning 200 and 400 freestyle Relay teams and overall helped account for 26 of the team’s total points.

Maddie Chai and Mimi deLisser are the Girls Varsity Squash Athletes of the Week.  With their intense, focused play on court, words of inspiration to teammates, thoughtful off-court leadership, and contagious Deerfield spirit, Maddie and Mimi led the team to an impressive 3rd place finish at the High School Division 1 Team National Championships this past weekend.  Despite tough competition, the co-captains also extended their individual undefeated streaks – an impressive feat.

Max just started playing squash when he arrived at Deerfield this year.  After starting the season on the thirds squad, Max has steadily climbed the ladder and currently plays #6 on the JV team.  Max works his tail off during practice and has been a force during JV matches.  Congratulations on a fantastic season Max!

Our athlete of the week is our manager, Caio Oliveira. Caio has done a fantastic job this season, as a solo manager helping both coach and players be more effective in practices and games. He takes on whatever needs to get done and he has been an essential part of our success as a team, or perhaps better said, he has been an essential member of our team. For his dedication and excellent work this season, we are happy to award Caio our Athlete of the Week honors.

Valerie Ma ’17 is our Athlete of the Week this week. It has been a joy to watch Valerie’s growth as a basketball player throughout her years on the team. She has developed the ability to see the floor and take advantage of offensive opportunities, and makes smart decisions under pressure. In an important game against Loomis on Saturday, Valerie came off the bench ready to shoot and score — and she did, sinking two precise baskets from just inside the three-point line and helping Deerfield achieve a 36-20 victory (a meaningful accomplishment after a 60-10 loss last year!). Valerie’s calm demeanor, dedication to daily improvement, and understanding of what it means to win and lose with class all make her a true athlete and a leader by example. Her teammates clearly look up to her, and she is a great exemplar of what community participation by upperclassmen should look like in her dedication to competing and being an athlete even at the sub-varsity level. Her coaches greatly appreciate her membership on the team and are sad that this is her last season with us. Thank you, Valerie!

This week JV swimming salutes another stellar senior co-captain, Sydney Williams.  Sydney leads by example in the pool and on deck—she is always positive, always eager to give it her best, and she’s happy to pitch in and do what most of the team cannot… the 100 butterfly!