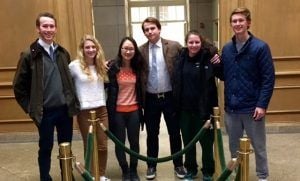 It is difficult to put words to how well Andrew Peck played for his teammates.  Turning away 35 quality shots, Andrew demonstrated poise and confidence throughout the whole game.  His teammates play well in front of him, but he was the reason we stole this game from Cushing.

After being down 0-2 at the #1 spot, Rob came back to win his match 3-2 which allowed the boys varsity squash team to clinch a tough road win against a higher seeded St. Paul’s 4-3. With the win the team remains undefeated on the 2016-2017 season!

Francis Simmons was nominated as Athlete of the Week for the boys JV basketball team by Norm Therien following Friday’s game vs. Eaglebrook and Saturday’s game vs. Williston. Francis gives his best effort for his teammates and he is a hard working senior player who always puts his team above himself! Francis gave the team 17 points against Williston, and his leadership has been invaluable this year. Thanks for being a great team player, Francis!

In back to back weeks Janis has played tough and beaten opponents from Taft and Eagle Hill. In our close victory over a strong Taft squad, Janis rallied from two games down and won in five games to help seal the victory for the team.

Molly is a standout in practices and games for her aggression, ball-handling skills, ability to see the court, and quick movement during plays. She gives her all during our practices and brings the kind of focus and dedication we need. Her effort translates to success on the court: in our game against Hotchkiss on Saturday, she was tenacious, pushed it, and played consistently, and when she had to come off the court due to an injury, her absence was noticeable. Basketball skills and pure athleticism aside, Molly is a true athlete thanks to her sportsmanship: win or lose, she is humble and gracious to other teams. She possesses a short memory and the desire to keep working no matter what, and is highly coachable. Both her teammates and coaches look to her on the court to model the kind of smart, clean play we need. Thank you, Molly!

The Athlete of the Week for the boys thirds basketball team is Darrel Dartey ’20. Darrel earns this week’s honors for his efforts against Loomis Chaffee and Avon. Darrel has really stepped up his game over the past weeks both on offense and defense. Darrel has been improving all season and his hard work is paying off as he is getting to the basket effectively, rebounding better, playing better team defense, and showing increasing confidence in his role as a point guard. Most importantly, in both games this past week, Darrel has been at the heart of our fighting spirit as a team.

Our athlete of the week is Emma Reavis, who played outstanding in a week when we went 1-1 as a team. Last Wednesday against a very strong and talented New Hampton team, Emma proved to be our offense spark. She was able to get by the New Hampton defense and finish some acrobatic shots in the lane. On Saturday, in a decisive win over Hotchkiss, Emma was virtually unstoppable offensively. She finished the game with 21 points scoring in a variety of ways: converting steals into layups, hitting three-point shots and driving into the lane and finishing strong. We look forward to more strong play from Emma in the remainder of the season!

JJ Siritantikorn ’19 has persevered with quiet determination in his pursuit of excellence in our sport. After cracking a new lifetime best with his first varsity win in the 100 breast against NMH, he continues to climb the depth chart on the team and in the league. JJ has added new events to his skill set, and has been remarkably attentive to new techniques and mechanics in all four strokes.

In a 2-0 week for the Girls Varsity Hockey team, it is incredibly challenging to identify just one Athlete of the Week. There were many standout performances on the ice, as well as moments of impressive leadership and “team first” attitude in the locker room. Ultimately, we will recognize two 9th graders who played their best hockey of the season this week: Christina Halloran and Aurora Devereaux. Halloran was a force to be reckoned with against Pomfret and Andover, flying all over the ice with a confidence we hadn’t yet seen this season. She assisted on three of the team’s goals against Pomfret (including one beautiful pass from behind the net), and scored the winning goal against Andover in the final minute of play. Devereaux also had a breakout week, notching a goal and an assist against Andover. Though Aurora has been a defenseman her entire career, she has been playing center for us since the beginning of the year. Not entirely comfortable in this position, Aurora has been willing to do whatever necessary to help the team, has been eager to learn, and has been getting better each and every week. She is an incredibly talented player, and her willingness to step into a new role has been a huge part of the team’s success this season.

Alex saved us from a shutout against Suffield’s JV team last week, saving a match point before winning in five games. He followed that up with another victory against Eagle Hill on Saturday, extending his personal winning streak to seven matches in a row.

Nikita Pelletier was nominated as the girls varsity swimming & diving athlete of the week for her outstanding performance against tough competition at Andover.

This week, JV swimming salutes senior co-captain Jiwon Shin for her fearless leadership in lane 1. Jiwon has been a standout contributor all season. In fact, she’s been a star for four years– the team’s only four-year member!  Jiwon is strong enough to swim any event the team needs her to swim, from the 500 free to the 100 fly. More importantly, she’s always willing to accept the challenge. Kudos to Jiwon for her talent and leadership in the pool and on deck.