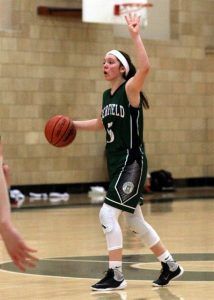 It is a tale of 2 January’s for the girls varsity basketball team when you compare their 2015-2016 season to this winter’s campaign. The team is on the rise and the future is bright!

The girls have already more than doubled their wins from last season. With 6 regular season games that remain, the team holds a current record of 7-6-0. A big part of this year’s success has come in the month of January. Currently, the team holds a 4-3-0 January record.

The Big Green’s improvement is both on the offensive and defensive side of the ball. This January the team has scored 348 points, which already surpasses the 273 points scored in January 2016. On the defensive end of the court, the team has only given up 341 points so far this month which is more than 22% less than the January total of 433 from 2016. Keeping in mind that this January the team played one game less than in 2016 as the result of a game being canceled due to inclement weather.

You can read the coaches’ write up on their most recent win vs. Hotchkiss here:

Deerfield Girls enjoyed another win on the road on Saturday against perennial rival The Hotchkiss School.  DA jumped out to an early lead with an unrelenting press, capitalizing on Hotchkiss’ passing mistakes and converting them to easy layups.  DA went up 30-4 in the first 10 minutes of the half.  With a 20-point lead heading into the second half, Deerfield enjoyed tenacious play from all 13 players (one player did not play due to injury), including 9 players contributing baskets to the win.  Emma Reavis led all scorers with 21 points.  Megan Graves dropped 13, and Lily Fauver added 10.  Felicia Renelus and Sarah Du each contributed 6 points.  Deerfield will host Kimball Union Academy on Wednesday, as they roll ahead through a busy January schedule.