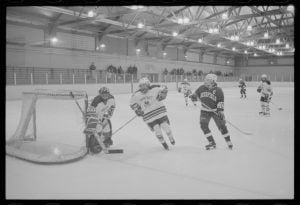 Katie Guay ’01, a stand out four-sport (hockey, soccer, lacrosse and softball) athlete while a student at Deerfield was featured in the Providence Journal for being “the first woman to referee Division I hockey games on a regular basis.” What is most impressive about this feat is the fact that she is regarded as one of the best refs in the ECAC, the league in which she works the majority of her games. For her efforts, she was selected as one of the four officials to call the Cornell vs. UNH “Frozen Apple Game” on November 26th at one of hockey’s most storied arenas, Madison Square
Garden. Following her time at the Academy, Katie went on to play four successful years of hockey at Brown where she posted a score line of 29 goals, 40 assists and 69 points in 128 career games. To learn more about Katie and the pathway she is paving for women in sports please read the full feature by clicking on the link below. Katie Guay ’01 (on right) with her teammates, Kate Hession (left) and Lizzie Rosenberger (center), in the locker room before a game.