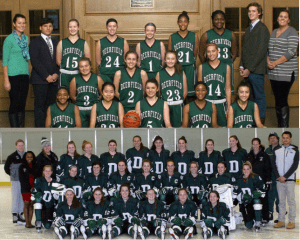 Girls JV hockey kicked off the Saturday line up of games with a 6-4 win over Exeter’s JV team. The girls trailed Exeter for most of the game, until they unleashed their scoring prowess in the third period to take the lead and seal the win. Despite, conceding a penalty in the final seconds of the game, the girls held onto their lead to earn a home victory!

The girls varsity hockey team followed the performance of the JV team to earn a 4-1 home win vs. Exeter. From the drop of the puck, Deerfield played smart, hard, and together, putting together their most consistent effort of the season. In the first period, they put eighteen shots on the Exeter goal, but actually came away down 1-0 when the visitors had a bounce go their way on the power play. However, the team leaders really stepped up in between periods, energizing their teammates and rallying everyone to renew their efforts. It clearly worked, as Christina Halloran ’20 evened the score with a beautiful deflection off a Deirdre Mullowney ’19 shot. Then, the power play unit, who had been dangerous all afternoon, finally converted as Jenna Greenbaum ’17 slammed home a Meghan Halloran ’17 rebound. In the third period. Greenbaum found the elder Halloran out front for the third goal, and then Erin DeMarco ’19 scored the first of her Deerfield career with a smart shot from the point. Jordan Manning ’19 earned the win in goal, while the Exeter goalie was outstanding with 34 saves on the day. Everyone contributed to this great team win!

On the road at Exeter, both the JV and varsity girls basketball teams tipped off at 3:30pm on Saturday after a long bus ride north. In a close and evenly matched game, the girls JV team held on for a nail biting finish to earn the W and hand the Big Red their first loss of the season, 27-24.

Deerfield girls’ varsity basketball enjoyed a well-earned win on the road at Exeter.  DA took control early in the game with relentless man to man defense and full court pressure.  Though it took a while for shots to fall, DA’s control of the ball and fast breaks helped them keep a solid lead of 13 points to end the first half.  Deerfield was eager to prove they are a second half team and came out with energy and focus for the final 16 minutes.  They extended their lead another 10 points in the second half to end the game with a decisive 23-point advantage, 48-25.  Deerfield enjoyed balanced scoring with forwards Lily Fauver and Erika Ekhator contributing 10 and 9 points respectively, Felicia Renelus and Emma Reavis adding 9 points, and Megan Graves and Erin Tudryn each chipping in 6.  This is the first time Deerfield girls’ varsity basketball has beaten Exeter in at least 4 years!

Congratulations to both girls hockey and girls basketball!