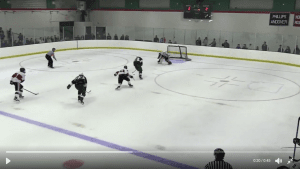 Behind an unbelievable performance by Sophomore goalie Thomas Gale ‘19 (40 saves), the boys varsity hockey team defeated 2nd ranked Loomis 3-2 in overtime. For the second game in a row, the scoring opened up less than thirty seconds into the game. Although this time it was the visitors who took the early lead off an odd man rush that allowed a Loomis forward to shelf the puck over a sprawling Gale ‘19. Despite going down early, the boys kept fighting and out-shot Loomis by a mark of 13-10 after the first. It wasn’t until the middle of the second frame when an odd man rush of our own allowed a trailing Senior Justin Masella ‘17 to fire home the first of his career and tie the game at a goal apiece. Loomis would take the lead for the second time in the game when an early third period DA penalty allowed their power play unit to go to work. However, the big green responded with a power play goal of their own when an incredible individual effort from PG Danny Farr ‘17 knotted the game up at two. The goal was also Farr’s first of the season. With the game tied at two at the end of regulation the teams would switch sides and battle it out in a sudden-death five minute, 5 v 5 overtime period. After some quality scoring opportunities for both sides, with less than a minute remaining, Junior Brett Pastor ‘18 found a streaking PG Chad Haggerty ‘17 who would make no mistake, sniping the breakaway opportunity right over the Loomis goalie’s glove, sealing the W for the home side. The big green improved their mark to 7-4 on the season and have a big weekend coming up as they host Cushing on Friday night and travel to Trinity-Pawling on Saturday. Go big green!