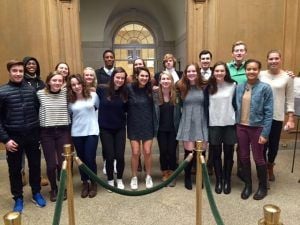 9th grader Vera Menafee is the JV girls’ basketball athlete of the week this week thanks to her strong contributions to the program so far. She works extremely hard in practice and games, focusing during drills, sprinting as hard as she can during conditioning, and dedicating herself to improvement overall. She was our leading scorer in our win over Exeter and took the most shots and grabbed the most rebounds in last week’s matchup versus Taft. In the words of Coach Kelly, “She was clutch and never stopped hustling!” Vera also plays strong down low. Overall, her efforts pay off, and she becomes a better player each day. In addition to her skills and hard work, Vera is a kind and respectful teammates. Her coaches and her fellow squad members value and benefit from her presence on the court, and she will be a key member of what is sure to be a great rest of the season.

Jenna was our most consistently dangerous forward in our win against Exeter on Saturday, slamming home one goal and assisting on another with a beautiful pass in front of the net. Most importantly, however, Jenna forechecked aggressively, and used her speed to make life difficult for her opponents in all three zones. She had an extra jump in her step all game long, and this energy played a big role in securing the victory for our squad. A special thank you to Jeff Gonyer, from the Girls Hockey team, for his assistance in the rink this Saturday!!!

Hope Smith from the Girls Thirds Squash team. On Saturday Hope played a gritty match against her Andover opponent. The match went to five games and in the final game she was down by six at one point. She rallied and won the game 11-9 to help us defeat an extremely tough Andover team. A 1-2-3 sweep on the board by Teddy McCarthy, Julian O’Donnell, and Ossie Heard made the difference in a meet that was decided in the last relay. Final score 94-92. Each diver earned a new personal best in a pressure situation.

Olivia had the match of the year so far this Saturday at Westminster. After falling behind quickly to her opponent 2-0, Olivia showed incredible grit to hang in with her opponent. After saving several match points, Olivia won the third game 13-11, and swept the next two games to win her match. What a comeback!

Patrick Han, Nate Chong, and Liam Jeon, each a senior, joined the wrestling team this winter, taking on a new challenge when easier options were available.  Their willingness to learn from and compete with their teammates reflects well on the qualities we hope to celebrate at all levels of athletics here.

Tierney Roche 18’ is the JV girls hockey player of the week. Last Wednesday, Tierney’s strong defensive play held NMH to very few shots and she scored a beautiful goal from the blue line in our 8-1 win over the Hoggers. On Saturday, Tierney played a stellar defensive game against a tough Exeter team. In the third period, she stepped up offensively and scored two beautiful goals to lift us to a 6-4 win. Tierney’s leadership and grit made the difference for us on Saturday and we congratulate her on a successful week of hockey!

Against Eaglebrook, Max clinched the match for us with a five-game win at the #3 position. He then slid up to the #1 spot against Westminster and took down his opponent in three lopsided games. This was Max’s swan song on thirds, as he has successfully challenged his way up to JV – we thank him for his contributions this year, and wish him good luck for the remainder of the season.

Colman Shea is the athlete of the week for boys’ varsity basketball.  Colman started the year as our sixth man coming off the bench and has grown into a starting role as our power forward.  He is developing a versatile inside-out game, showing ability to knock down three point shots and work inside on the low block.  He broke out for 25 points, including 6 three pointers against Salisbury last Saturday.

Anthony Mancini who played a great game on Saturday against Trinity-Pawling on Saturday. He helped us kill ten penalties and scored a big goal in the third period.

It is hard to imagine an athlete that is more committed to the spirit of JV swimming than Maddie Blake. As one of our senior captains, Maddie shows up on time and ready to work every day and delivers a burst of enthusiasm whenever she is on deck or in the pool. She has been deeply committed to her growth and the growth of our team over her three years with the squad, and our team is faster and more fun because of her leadership.

Week 1:  Rada Pavlova: For an impressive start to the season having never swum competitively before.  Her effort and work ethic are an inspiration to the team!

Week 3: Emily Stonestreet: For extraordinary effort and positivity in practice that week.

Week 4: Jordan Coan: For being open to swimming whatever event the team needs her to swim on a moment’s notice. An effective pinch hitter!

Harbour Woodward is the Girls’ Varsity Squash Team Athlete of the Week.  A tough, tenacious player, Harbour kept her undefeated streak going this past weekend – even as she stepped up to the #1 spot in Deerfield’s contests against Choate and Ethel Walker School in the annual Choate Tournament in Wallingford.  Every day, Harbour stands out as a player who consistently pushes herself and her teammates to work hard in practice.  Dedicated to Deerfield squash and to achieving excellence, Harbour is an exemplary team player.

With stifling and spirited defense, Mamadou helped the team to our first win of the season against Worcester on Saturday. His shooting touch has been heating up all season, and he contributed eight points to the 41-22 victory. His spirit is infectious on the floor, always encouraging his teammates to be at their best, and setting an example of both tenacity and teamwork. We’re looking forward to Mamadou’s leadership and heart throughout the season and are thrilled to award him the Athlete of the Week!