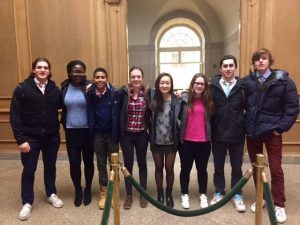 Co-captains Sevrin and Griffin Sarachek have been instrumental in the success of the Deerfield Academy’s boys alpine ski team over the past few years.  Picking up where they left off, the captains placed 2nd (Sevrin) and 3rd (Griffin) in the opening slalom of the season.  This past Wednesday they placed 1st (Sevrin) and 2nd (Griffin) in a demanding giant slalom race in the fog.  A super start to the ski season.

This week, the JV squash team bounced back with a 4-3 victory against Choate.  While there were many great performances, Tom Slack stands out as our athlete of the week.  Tom played the best squash of his life, moving his opponent around the court by placing shots with confidence and precision.  Tom won the match 3-1 and earned the satisfaction of a win over Choate!

GV Hockey’s Athletes of the Week are our two goalies, Liv Mikesell ’20 and Jordan Manning ’19. The team went undefeated (2-0-1) against three good teams last week, and the outstanding play of our goaltenders was a big reason for that success. Liv was particularly strong against Taft, making save after save to keep her team in the game when we were struggling, and Jordan was rock solid against a ranked New Hampton squad, including coming up with a game-saving stop on a breakaway late in the third period.

Our athlete of the week is Ericka Ekhator. After being sidelined by injury in 2016, Ericka has worked her way back onto the court in 2017 and is back at full strength. She is coming off of two big performances for us, including recently putting up 16 points and 7 rebounds while playing all 32 minutes in our win over Andover. Ericka’s strength in the low post has added an extra dimension to our offense and we are happy to have her back in our rotation!

Jane Mallach ’20 is the girls’ JV basketball athlete of the week for her stellar performances in games against the Williston Northampton School and Phillips Academy Andover. Jane is a key member of the team’s starting offense for her effective shooting and passing as well as her ability to read the defense and see opportunities outside of the team’s set plays. Against a highly talented and athletic Andover team on Saturday, Jane hit an incredible three-pointer. Jane is a true athlete who brings tremendous focus and determination to her game performance and works to improve in practice each day. Most importantly, she is a good sportswoman and focuses on pushing herself to exceed her own past achievements. This has been one of the best JV basketball seasons in living memory, and Jane has made a critical contribution to our winning record so far. Her coaches and teammates can count on her to execute and make the smart play, and we are glad to have her with us this season! Thank you, Jane!

Ethan was the only Deerfield player to go 3-0 in a busy week of close matches. Two of his wins came in five games (a gritty win at Choate to keep momentum on our side, and a close win playing “up” in the #3 position against Taft), while the third gave us some breathing room against a plucky Bement squad. Ethan has really hit his stride as we move into the middle of our season, and we will surely count on him in the difficult matches ahead.

In what proved be a close dual meet against St. Paul’s, Aiden set the tone for the team in the opening match by earning a major victory. He scored a takedown in the final seconds to secure the 8-point margin that led to the extra team point.

Our athlete of the week honors go to Henry Renelus ’20. Henry came into the season a skilled and intelligent player whose calm demeanor belies the strong competitor inside. Henry contributes significantly on both sides of the ball, whether it’s bringing the ball up on offense as one of our primary point guards, or guarding the other team’s point. Henry has been gaining confidence in the offensive system and with his new teammates, and we’re starting to see Henry settle into his role as a scorer. He has led us in scoring in two out of the last three games he has played, hitting 14 against Avon and most recently, 12 against Eagle Hill. He has proven himself to be an effective 3-point shooter, but when they come out to stop the three, he deftly makes his way to the rim for a short floater or a strong layup. We’re looking forward to seeing Henry continue his significant contributions to our team effort.

After a tremendous prior week with two huge individual wins in a victory over Exeter, Bobby Meyer ’17 continues to impress. He notched another lifetime best in winning the 50 free on Saturday to keep our contest against Choate within reach. Willing to excel where needed, his leadership in and out of the pool is invaluable to our success.

After an excellent week of practice, it came as no surprise that Cameron Heard ’18 played a great match against Westminster on Saturday. Playing an opponent three spots higher in the ladder, Cameron got over some pre-match nerves, sweeping her opponent in three short games.  Performances like these showcase the strength at the bottom of our ladder this year!

Ally Bazarian is the girls varsity swimming and diving Athlete of the Week for being a tough competitor through thick and thin!

Will Santos has been a versatile contributor and important leader for us as we entered into the meat of our schedule.  Due to injuries, we called upon Will to assume point guard duties for the team last week.  He handled this task well, leading the team to strong showings against both Cushing and Andover.  Unfortunately, he came down with an injury of his own against Andover.  We are hopeful we can get him back and healthy for the stretch run next week.

We’re excited to award this week’s Athlete of the Week Award to our senior co-captain Mamadou Yattassaye. With ten and thirteen points against Cushing and Andover, respectively, Mamadou solidified his reputation as a threat to score anywhere on the floor. In addition to his successes on offense, Mamadou’s tenacity on the defensive end was the keystone to a press defense that resulted in multiple steals and turnovers against Andover. He’s consistently held high expectations for himself and his teammates throughout the season, and we’re eager to see his continued success throughout the year!​

This week JV swimming would like to salute Jacqueline Alvarado-Perez for her steady leadership in lane 7.  She’s improved impressively as a swimmer since joining the team as a sophomore, and now as a senior she’s teaching other newcomers stroke techniques and flipturns.  Thanks for your dedication to the team, Jacqueline!

With her effervescent spirit, Soo-Min Lee stands out as this week’s Athlete of the Week for the Girls Varsity Squash Team.  Her positive attitude buoys up her teammates during practice, and she always works hard to improve her game, listening attentively to instruction and focusing intently while drilling.  Soo-Min’s consistent, hard work paid off this week, too, as she soundly defeated all her opponents.  Even when the weather is bleak outside, Soo-Min lights up the courts with her contagious love of the game.

The boys varsity hockey athlete of the week goes to Senior Justin Masella ’17. Since the beginning of the season, Justin has always put the team’s best interest ahead of his own and has bought into whatever role the coaches have asked him to play. Justin has been the quarterback of our penalty kill and has been an influential leader both on and off the ice. Not only is Justin our athlete of the week, but because of his leadership qualities, he will also serve as one of the team’s captains for the remainder of the season.