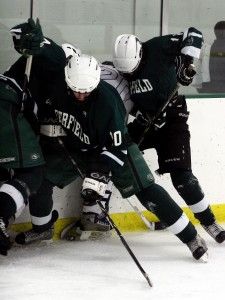 They won’t be needing a GPS to figure out where they’re going to college next year, nor will they have to endure the waiting game to solve the mystery of where they will be playing collegiate hockey. They already know. . . they knew before the first puck was dropped on their last season at Deerfield.

“It doesn’t happen as often as it used to,” said Big Green hockey Coach Brendan Creagh, of players knowing which college campus their yellow brick road will lead them to before their prep school careers have come to a close. That’s because college coaches and scouts like to follow a player’s maturity—both physically and mentally—for as long as possible in an effort to more effectively predict how much a player’s game might develop over a period of a year or two at the next level.

To college coaches and scouts (in any sport) their philosophy today appears to be “The older, the better!” whenever dealing with recruits, and according to Creagh, “that’s exactly why you don’t see these guys rushing out to get younger players onto their campuses.”

Four seniors on this year’s Big Green hockey team, however, have become the exception: They are signed, sealed, and all but delivered to the collegiate level.  Forwards Trevor Yates and Sam Lafferty will be taking their talents to the Division I level, with Yates heading to Cornell, while Lafferty has opted for Brown. Forward Camil Blanchet and defenseman Cullen Geary, meanwhile, will both turn into Polar Bears next winter—at Bowdoin.

“It’s definitely a relief knowing as early as possible where you’re going to be playing your collegiate hockey,” admitted Geary, a 6’2”, 210-pound blue liner. “Until you know for sure, it’s something that’s always in the back of your mind. . . it’s something you’re always thinking about. Having been fortunate enough to have made my decision and now know where I’m going, it allows me to totally focus on my last season here at Deerfield.”

Although early decisions have become rare of late, Creagh isn’t surprised these four players were able to tie up loose ends with time to spare.

“All four have been key players for us, both this season and last,” said Creagh. “We came into the season knowing that we would be relying on them heavily if we were to have any success and we haven’t been disappointed in their play. . . they’ve all been key contributors.”

Nor is Creagh surprised that Lafferty and Yates solved their respective recruiting mysteries by ending up on Division I programs. Both are currently sitting atop the Big Green scoring charts for the second straight season. Heading down the final week of the 2013-14 season, Lafferty is the Big Green’s top gun with 51 points on 21 goals and 30 assists. That already more than doubles his output as a junior, when he netted nine goals and 15 assists for 24 points. And, if you toss in an 8-8-16 sophomore season, Lafferty has chalked up 91 points so far during his career on 38 goals and 53 assists.

Yates, meanwhile, has been even more consistent in making the lives of opposing goalies miserable: This season, he is second in the scoring column with 23 goals and 20 assists for 43 points. Last winter, he led the Big Green in scoring with 31 points on 18 goals and 13 assists. As a sophomore, Yates collected nine goals and 16 assists for 25 points to give him a career total of 99 points on 50 goals and 49 assists and one point shy of the coveted century mark with three games remaining.

“They not only lead the team in scoring, but they are currently one and two in scoring in the Founder’s League,” said Creagh of a league that includes such opponents as Avon, Choate, Hotchkiss, Kent, Kingswood Oxford, Loomis, Northfield Mount Hermon, Salisbury, Taft, Trinity Pawling, and Westminster.

“We haven’t had anyone lead the league in scoring since Kevin Roy was here (2009- 11),” added Creagh. During his sophomore and junior years with the Big Green, Roy, who is a sophomore at Northeastern University and who was selected by the Anaheim Ducks in the 2012 NHL Draft, netted 62 points on 31 goals and 31 assists. He opted to spend what would have been his senior year at Deerfield in the USHL, however.

“I’m really excited about playing my college hockey at Cornell,” said Yates, who obviously has a knack of putting pucks past goalies and, may we add, is the proud owner of a goal even “The Great One,” Wayne Gretzky, would be happy to claim ownership of. Yates has scored a goal that won his team a national championship – and it came in sudden death overtime. So, go ahead, try to beat that one with a hockey stick.

Unfortunately, that goal wasn’t scored while Yates was skating for Deerfield. He notched it last April while he was skating for the Neponset Valley River Rats during the 2012-13 Tier I Under 18 National Championships in Pittsburgh. The team qualified for the tournament by winning the state tournament during the fall portion of its schedule.

The title tilt, in which the River Rats were playing the St. Louis AAA Blues, saw Neponset send the game into overtime when it tied the score at 3-3 with just eight seconds remaining in regulation play. Yates then settled the matter in sudden death.

“I’ve been concentrating on improving my game away from the puck as well as my defensive play,” said Yates, a 6’2”, 200-pounder who also received interest from other ECAC teams such as Clarkson and St. Lawrence, Vermont out of Hockey East, and Penn State, a member of the Big Ten Conference and where Matt Lindsay, a former Big Green standout and son of Jim Lindsay, former head coach of the Deerfield hockey program, serves as an assistant coach.

“It was a tough choice,” said Yates, of his decision to attend Cornell, where he is clearly the exception rather than the rule as far as earning a Division I roster spot right out of prep school.  Of this season’s 27-man Big Red roster, only two players do not come from junior hockey programs.

“Academically, I’m interested in business and Cornell has an outstanding business school,” added Yates. “As for hockey, it’s among the best college programs in the country and I’m looking forward to the challenge of playing there.”

Lafferty is in total agreement with his teammates, saying, “It’s nice knowing early on where you’re going to be playing next season so you can concentrate on this season. Plus,” he added, “like my teammates, I’m very appreciative of the opportunity Deerfield has afforded me to reach the next level of hockey and I couldn’t have done it alone; I’ve received a lot of support here from my coaches as well as my teammates.”

The 6’1”, 180-pound forward is going to enjoy the best of both worlds as he moves on to the next level. He’s not only going to be playing college hockey on the Division I level, but he will be playing a year of junior hockey beforehand.

“It’s really something I want to do,” explained Lafferty. “I’ve always been sort of a late bloomer, so I feel playing a year of junior hockey will help me mature a bit more, both physically and mentally. Plus, Brown has already said it will keep a spot open for me come the fall of 2015.”

As for his junior hockey destination, Lafferty is still unsure exactly where that will be at this point.

“The USHL has a draft … the BCHL doesn’t,” added Lafferty, “so, I have some options as to where I can play up there. Plus, I think playing and living in another country would be a great life experience before heading off to college.”

Blanchet, meanwhile, has reached double figures on the Big Green scoring sheet the past two years. This winter, he has collected 20 points to date, thanks to seven goals and 13 assists. As a junior, the 6’1”, 210-pounder scored 12 goals and six assists for 18 points despite an injury-riddled season. He suffered a late-season ankle injury in soccer that hobbled him during the early stages of his hockey season. He then picked up a shoulder injury during the Flood-Marr Tournament and injured his other ankle late in the season. He went 7-2-9 as a sophomore to give him 47 career points on 26 goals and 21 assists.

Despite deciding to take the Division III route, both Blanchet and Geary drew interest from Division I schools. Blanchet received inquiries from UMass/Amherst, a member of Hockey East, as well as Dartmouth, Princeton, and Colgate from the ECAC. Geary’s primary interest on the Div. I level came from Providence College.

“If I’d opted to play Division I hockey, they wanted me to play a year or two of junior hockey,” said Blanchet, “and if I’d gone that route, I would have delayed my college career by a year or two and would have pushed my graduation back a year or two as well and I really didn’t want to be graduating from college in my mid 20s.”

“Plus,” added Blanchet, who is a three-sport athlete (lacrosse and soccer) at Deerfield, “going to Bowdoin will allow me the possibility to play some lacrosse, too, and that’s an opportunity I wouldn’t have had if I’d gone Division I.”

Geary, (2-6-8) who makes up half of the team’s top defensive tandem as well as a home on the Big Green power play and penalty killing units, found himself facing the same dilemma. The fine print on a hockey career with the Friars meant bridging the gap with a couple of winters in junior hockey.

Plus, like Blanchet, Geary isn’t specializing in just hockey. He has played varsity baseball for the Big Green the past two years. He plays both first base and outfield and a .350 batting average over the past two years has made him a mainstay in the middle of the lineup.

So although Geary admits “hockey is my primary sport,” he relishes the fact that  “attending Bowdoin will also allow me to continue to play baseball.” Then he adds with a grin, “Plus, my brother plays baseball at the University of Maine, so I’ll be able to keep tabs on him, too.”