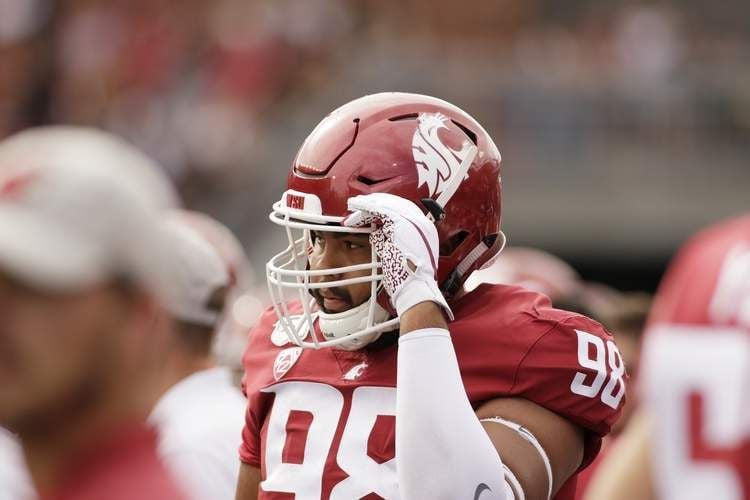 CEDAR RAPIDS — His original intention was to study engineering in college.

“It didn’t really take off for me until (prep school),” Hobbs said. “I did very little when I was a senior in high school, then it finally kicked into play leaving Deerfield. Just doing people’s commitment posts (online) was kind of where I fell into it. People started wanting those, and I was like ‘I think I can do something better.’ That’s when I actually started branching out and doing stuff.”

A junior-to-be defensive tackle at Washington State, Hobbs hopes to get into that field for some professional or college athletics team or teams. He has interned for the athletics department at WSU and done a good job of networking.

But more importantly, he recently used his creative talent in a very giving way. Hobbs designed, produced and sold a pair of different two-by-two inch stickers to benefit the family of teammate Bryce Beekman, who died unexpectedly March 24.

There has been no official cause of death yet for the senior safety from Louisiana. Hobbs’ stickers are of Beekman in uniform with angelic wings and another circle sticker with his name and number.

“After I found out, I made a piece of him as an angel above,” Hobbs said. “That kind of reached a lot of people. So that’s where the idea came about. It was like ‘Hey, if this can reach that many people, let me maybe make something out of it to benefit his family.’ That’s where the stickers came into play. I’ve been designing stickers recently, kind of been a sticker machine. It was something I’d been doing, so I thought maybe I could make something out of it.”

Hobbs first went to Washington State’s compliance department to make sure what he was planning on doing was OK. After getting its approval, he began creating order forms via his Twitter account (@dhobbs92) for interested customers.

“From there, just kind of hit the ground running,” he said.

Hobbs got so many orders, he couldn’t keep up with them and had to temporarily shut down his operation to catch up. He said around 225 people have ordered 700-plus stickers, which he still is producing and sending out.

Remember, he’s still taking classes online and doing individual workouts for football. He only has so many hours in a day.

“My mom (Angie) has been helping with the Excel file, is really a whiz with that stuff,” he said. “We’re piecing that all together, making sure all the money is right, so I can report it the right way. It’s going well.

“The hardest part was order confirmations by email. I had to do that all by hand. I think we responded to something like 500 emails in 48 hours … It definitely ended up being more work than I thought, which is why I am thinking about how I am going to go about doing the next orders.”

Hobbs said he probably will outsource the production of his stickers in the future. He hoped to have an official dollar amount he could inform the Beekman family about by the end of this week.

“Take football out of it,” first-year Washington State Coach Rich Rolovich told the Spokane Spokesman. “Dallas Hobbs, I’m not surprised at anything he accomplishes. This is an incredible human. I’m glad he’s on our football team, but I’m also glad he’s in this world. This guy’s making a difference in a positive way and being creative, but his heart is pure, and it’s a genuine thing he wants to do.”

“I have talked to (Beekman’s) mom a couple of times,” Hobbs said. “Trying to limit the conversations as much as possible just to give them their space right now. But they know I’m doing it, they reached out, too, about how happy they are. I’ve told them some of the numbers we’ve reached, and they’re really happy to see how much it grew. I’m waiting to tell her the official number and the amount raised. It’s definitely high, so she should be really happy and pleased to hear that soon.”

From a pure football standpoint, Hobbs appears to be coming into his own at a new position. He weighed 210 pounds as a senior defensive end-tight end at Washington but is a 295-pound tackle now.