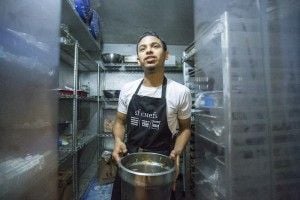 Daniel Scherotter ’87, former owner of renowned Italian restaurant Palio d’Asti, decided to take his cooking skills and history lessons to the classroom. After several years in the restaurant business, he decided to switch careers and become a high school teacher. According to the San Francisco Examiner, Daniel “helped to redefine the way students in San Francisco are taught social studies: by aligning cooking with history lessons and entrepreneurship. The class meets five days a week and is co-taught with a social studies teacher. Students spend 25 percent of that time in a restaurant-quality kitchen adjoined to a regular classroom. The two-year class is for juniors and seniors only, and is among four student labs at John O’Connell High. This year, another San Francisco public high school – Thurgood Marshall – is attempting its own version, but the movement is still raw at most high schools.”