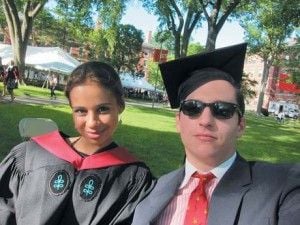 Harvard University graduates Nataliya Bugayova, the author of this article, and Misha Lemesh are back in Ukraine seeking employment opportunities.

“Editor’s Note: The Kyiv Post 20th Anniversary Series continues with an article originally published on Aug. 30, 2012 by Nataliya Bugayova on how to get into Harvard University. The former Kyiv Post staff writer graduated with a master’s in public policy from the Kennedy School of Government. Bugayova is now the newspaper’s CEO. She also wrote about Olga Belkova, another Harvard graduate, who is now a member of Ukraine’s Parliament. Bugayova’s advice and informational links have made this a popular story.

Getting admitted to Harvard and securing financing is improbable, yet not impossible, for Ukrainians. In May, I graduated from Harvard University’s John F. Kennedy School of Government with a master’s degree in public policy. And I would like more Ukrainians to have this chance.

To pre-empt skepticism, a logical aftermath of the corrupt practices of the Ukrainian education system, it did not take connections or money to get in. Stamina, conviction and brute luck were the keys.

When I submitted my application to Harvard, the odds were against. I was 21, while the average age of students in the program was 26. I had two years of journalism experience, not five or more serving in a war zone or government or running a nongovernmental organization, as many of my Harvard Kennedy School fellows did. There were no scholarships for Ukrainians admitted to Harvard graduate schools either.

It was a months-long application process – tests, essays, transcripts, and recommendations – almost another job, which I had to combine with reporting work at the Kyiv Post and studying full-time at Kyiv National Shevchenko University.

However, I knew that I needed Harvard, why I needed it and how I could contribute. The university supported my conviction and in April 2010, I was admitted…”

Read the full reprint article from The Kyiv Post.